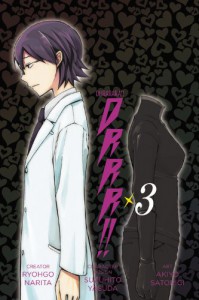 This volume is craziness. It also turns

Mikado, the naive country boy, into some kind of powerful and intelligent mastermind. How does Izaya fit into this, and what does he want from Mikado?

I enjoyed Shizuo's appearance in this volume, and that, in the midst of all this general craziness, he was at least sane enough to realize that a guy who says he loves a girl (er, girl's head) but doesn't know her name is probably cracked.

This was the volume when I realized that the series might end up skipping over many of the characters that the anime had covered in more depth. I was disappointed, because, quite frankly, I have zero interest in Mikado. I'd prefer to see more Shizuo and Izaya doing battle, or even more Celty and Shinra.