The Night Gardener by Jonathan Auxier 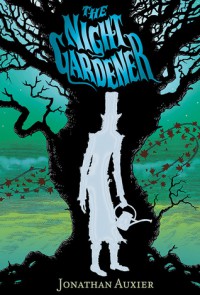 Molly and Kip are two siblings who escape the Great Famine in Ireland only to find themselves orphaned and penniless. Kip doesn't know the full truth – in order to protect him, Molly told him that they'd simply gotten separated and their parents would come for them soon. In the meantime, they need money and/or a place to live, so Molly lies about her age and gets hired as the Windsor family's new maid.

The Windsor family home is creepy and strange. It and the enormous tree next to it have nearly become one. Branches have grown through the walls, and the Windsors forbid Molly and Kip to do anything about it. Molly has to clean up mysterious muddy boot prints throughout the house every day, and Kip swears that he saw someone moving around outside at night. Then there's the locked room with the green door, the one room in the house Molly isn't allowed to enter.

I was disappointed when page 4 of this middle grade book had a shepherd “eyeing Molly from heel to head the way that men sometimes did.” It seems like every scary/creepy story starring a girl has someone leering at the girl to emphasize her vulnerability, and I'm tired of it. Molly was fourteen, penniless, parentless, and her sickly brother's only guardian – you'd think that would have been more than enough to show how desperate her situation was. Thankfully, there were only two instances of leering in this book, and Mr. Windsor wasn't one of the men who did it.

Okay, moving on. This started off nice and creepy. I enjoyed the house with roots and branches growing all throughout it, and Molly and Kip's discovery of the Night Gardener and his activities. I wanted to see if everyone would manage to break free of the hold the house had on them, and whether the Night Gardener would let them.

I do think that this book stopped short of actually being scary, at least for me (I can't speak for its intended audience). After a certain point, the “scary stuff” was pretty out in the open, and I tend to be more affected by psychological horror. By the end of the book, Molly and Kip knew what was keeping everyone at the house, what the Night Gardener was doing, and the rules the Night Gardener had to follow.

The ending seemed a little too easy. Molly had spent most of the book lying almost every time she opened her mouth and couldn't seem to stop even when she knew that others were aware of what she was doing. The Windsors had been completely sucked in by the things the house was doing for them. All it took was a couple big action scenes to make everything better. I think I'd have been more on board with this if all the characters' problems had been supernatural, but they weren't. I suspect younger readers would be happier and more satisfied with how things turn out for Molly, Kip, and the Windsors than I was.

Overall, this was an okay read. I wish it had been as creepy by the end as it was in the beginning, but at least I stayed interested throughout the whole thing.