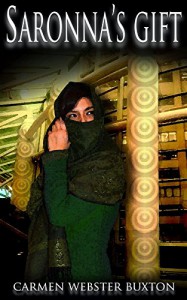 Disclaimer: The author offered me a free copy of this book in exchange for a review. She has commented on a few of my reviews in the past, but we don't otherwise know each other.

The other books by Buxton that I've read were all marketed as sci-fi, although they all had some romantic elements. I was interested to see what Saronna's Gift, her first book marketed as sci-fi romance, would be like.

This book takes place on Krueger's World, which was colonized by Adolph Krueger. Krueger started off as leader of a fundamentalist Christian group and, from there, sort of became the head of his own cult. The people of Krueger's World rejected a lot of Earth history, technology, science, and medicine. Women  basically became property – if it wasn't possible to marry them off, their patriarchs could sell them. If I remember correctly, men could only have one wife, but they were permitted, even encouraged, to have multiple women.

When we first meet Saronna, her father is taking her to the off-world quarter to meet Vladimir Trushenko, a prospective buyer. To Saronna's dismay, the sale goes through, and she learns that Vladimir intends for her to be his son Duncan's woman. Just one thing: Vladimir didn't bother to tell Duncan about all of this. Duncan is horrified to learn that his father bought another human being for him, and learning that Vladimir primarily intended Saronna to be company for Naomi, his native girlfriend (sort of – it's complicated), only mollifies him a little. Since he can't send Saronna back to her family without risking that she'd be punished, he tells her she can stay as long as she wishes and he won't ask anything of her. She can leave anytime she likes, and he'll even help her get the education she'd need in order to live independently among off-worlders. This is all well and good until the two begin to fall for each other.

This was a risky premise for a romance, to say the least. According to the laws of Krueger's World, Duncan owned Saronna, whether he wanted to think of it like that or not. He assumed that the signs Saronna liked and was attracted to him were real, but, for all he knew, she could have been faking it so as to keep her protector/owner happy. Could a believable, non-icky romance actually develop in this situation?

There were some promising initial signs. I liked that Duncan recognized that telling Saronna she could leave his household anytime she wished wouldn't mean much if she didn't have a proper education. Also, he didn't force her to learn things she might consider to be heretical. Instead, he gave her options. After he found out she could read, he gave her access to his family's library, recommended a few books to her, and told her he'd hire a tutor if she wanted one. Saronna was unusual for a woman of Krueger's World, and she adapted to her new life fairly quickly.

Unfortunately, there were a couple times late in the book when Duncan let his own hurt pride/feelings trump Saronna and her situation. When Duncan finally realized that Saronna had telekinetic powers and had probably been using them against him (reducing his arousal), instead of actually talking to her about it, he took an aphrodisiac and made her think he intended to enforce his rights as her owner and rape her. Even if he'd had no intention of going through with it, she didn't know that. His behavior was so awful that I was stunned.

He did admit that what he'd done was wrong, but I didn't like the way his actions were presented as being on the same level as Saronna's. Yes, she telekinetically manipulated his body without his knowledge or consent, but it was literally her only protective measure in a world where men were legally permitted to rape their women. Duncan wasn't a native of Krueger's World and didn't think the same way they did, but he kept forgetting that Saronna's worldview might not be the same as his.

Later on, Duncan screwed up yet again when he learned about the secret women's religion that prompted Saronna to keep him at a distance even though she cared for him. Once again, instead of  sitting down and talking to her about it, he let his hurt pride dictate his actions, barged into her room, and searched through her things as she shouted at him to stop. I admit, I had little sympathy when, after that, he nearly drank himself to death.

I found Vladimir to be more appealing than Duncan. He was just as dense about certain aspects of Krueger's World, but he was also far less likely to allow his emotions to rule his actions. His relationship with Naomi, a native woman he purchased several years before Saronna to save her from being traded by her husband in a card game, was surprisingly sweet. Although their relationship was very much secondary to Duncan and Saronna's, I enjoyed the way the story examined and addressed the disconnect between his viewpoint as a ThreeCon man and her viewpoint as a Krueger's World woman.

In general, I liked the women in this book. Saronna was strong and soaked up the new knowledge she gained in the Trushenko household like a sponge. Naomi was more of a traditional Krueger's World woman, but I found myself caring about her enough to fret over the situation between her and Vladimir and to wish he could see the world through her eyes for a bit. Vonda, Duncan's mother, was brittle and a little mean to everyone but Duncan, and for some reason I liked that about her. The bit where Saronna verbally fought back against her was great.

My notes for this book give it a rating of C-/C/C+, which is anywhere from 2.5 to 3.5 stars. Had it not been for the scene were Duncan acted like he was going to rape Saronna in order to trick her into demonstrating her powers, I'd probably have settled on 3.5 stars, because everything else worked pretty well for me.