The Alpha and His Ace by Ana J. Phoenix 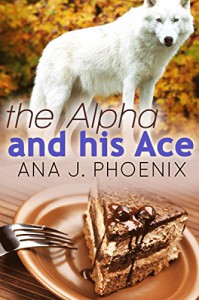 Brandon is the alpha of his werewolf pack, but lately he's had trouble holding onto their respect. Everyone knows a good leader needs a mate by his side (don't look at me, I'm just writing what the story said), and Brandon still hasn't managed to find his. Since going to gay bars doesn't seem to be cutting it, he decides to try regular bars, too. Almost immediately he's hit on by a very drunk woman named Ruby. He's not interested, but it's also pretty clear that she's drunk enough to get herself into trouble, so he helps her get back to her apartment only to discover that her roommate, Aidan, is his mate. Just one problem: Aidan is asexual. Brandon's not about to run away, but, as he learns more about asexuality, he wonders if his mate will ever be able to become a werewolf, a process that would involve having sex.

This was apparently based on a prompt from someone in a Goodreads group. If the picture I saw was what the story was based on, it's a good thing it wasn't included with this e-book file, since I'm reasonably certain it's someone's Wolf's Rain fan art.

Okay, moving on. This story did not get off to the best start, and I was worried it would turn out to be completely awful. Although it did improve, I still had lots of issues with it.

I disliked that the world rules were set up so that sex was required for someone to be turned into a werewolf. What aspect of sex was it that turned someone into a werewolf? Was it a magical thing tied to, say, orgasms? Or was it more of a sexually transmitted disease? Was it transmitted via semen or blood? None of this was mentioned, probably because exploring those world rules too deeply would have meant admitting that maybe some activity other than penetrative sex could have done the job just as easily.

The asexuality aspect was handled clumsily, but better than I'd feared. I'd have preferred it if the author had chosen a less clunky way to communicate information about asexuality than having Brandon consult the AVEN website a few times. On the plus side, asexuality was not presented as a “one size fits all” thing, and the werewolf soulmate bond did not “cure” Aidan of his asexuality. Brandon made some assumptions and screwed up a bit, and it was emphasized that, for his and Aidan's relationship to work, they had to be open with each other.

As I was reading this story, I had an epiphany: in the process of exploring an asexual relationship, this story was not saying very good things about sexual relationships, or at least Brandon's views on them. Sexual attraction doesn't negate the need for things like good communication, dating, and getting to know each other, but you wouldn't know it from the way Brandon thought. Although he'd slept with tons of guys, he'd never dated anyone and hadn't thought he'd ever need to use romantic words or gestures. Not because he didn't think he'd ever find his mate, but because he just didn't think all of that was necessary. I had the feeling that, had Aidan not been asexual, Brandon would have expected the two of them to have sex within 5 minutes of meeting each other.

I kept waiting for Brandon to realize that, not only did he not know Aidan very well, he hadn't yet made much of an effort to change that. Every time he met Aidan, he learned something new – that he had a little sister, taught fencing, and owned a motorbike. Rather than slow down and take the time to learn more, Brandon just fretted over how to convince Aidan to like him when he wasn't going to be sexually attracted to him, and worried that he wasn't going to be able to keep his own desire in check. It was incredibly frustrating. I mean, it wasn't like he had some kind of deadline. Brandon struck me as being both impatient and oversexed.

I've read far worse asexual romance stories than this, but that still doesn't mean this was very good. The world-building was sketchy at best, I couldn't fathom how someone like Brandon could be pack leader, and Aidan's reaction to Brandon suddenly shapeshifting in front of him was unbelievably chill. Also, Brandon spent more time worrying about Aidan's asexuality than really getting to know him as a person, and the romance suffered as a result. There was no real feeling of intimacy and closeness between the two of them. Even the cake Brandon brought Aidan was more a thing inspired by AVEN forum posts than by him actually getting to know Aidan.

If I pick up the sequel, My Alpha and His Cake, it'll be because it's cheap and I'm a completist.