Timeless Innocents by Janis Susan May 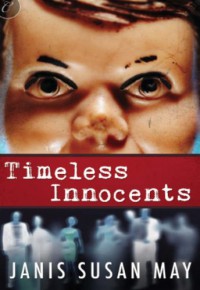 Brianna Forte's father would have been the executor of Ralph and Bette's estate, except the same car accident that killed Ralph and Bette also put Brianna's father in critical condition in the hospital. And so Brianna finds herself having to deal with everything on her own...including the one room in Ralph and Bette's house that she never got to enter when she used to visit as a child.

Although the couple had lived frugal lives, to the point that they still had dial-up Internet, they apparently had spent a small fortune amassing an enormous collection of Timeless Innocents figurines. The locked room in their house is filled with them. Although each one is clearly well-made, Brianna finds them to be distasteful, for reasons that seem to go beyond her usual dislike of kitschy knick-knacks.

It probably helps if you go into this story with a preexisting dislike of dolls and figurines shaped like people. Even if there hadn't been something off about the Timeless Innocents figures, I'd probably still have been creeped out by a whole room of them.

At any rate, anyone with even a little experience with the horror genre could probably guess how this story turns out. There wasn't really anything new here, but I did enjoy the slight creepiness of it all, particularly the “Dan” figurine.

Brianna wasn't exactly a likable character, but I could feel some sympathy for her as she thought about her distant relationship with her father, her uncertain future as a lawyer, and her issues with her boyfriend. Brianna's boyfriend was a controlling jerk who rapidly went from annoying to scary, and I cheered a bit when he was neatly dealt with, although I imagine Brianna will eventually come to regret the decision she made at the end of the story.

Characters' emotional reactions felt somewhat hollow, and some of the phrasing struck me as being old-fashioned. For example, Brianna mentally called Jason, her boyfriend, a “son of a so-and-so” (19), and Jason got upset when he thought that Brianna had “taken up with someone else” (71). Overall, though, I enjoyed this nicely creepy story. I only wish I'd gotten to see a bit more of what the figurines could do.