Alice in the Country of Hearts: The Clockmaker's Story, story by Quin Rose, art by Mamenosuke Fujimaru, translated by Angela Liu 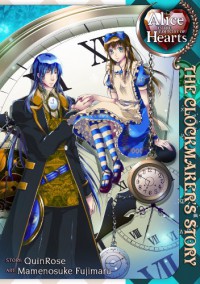 If you're not familiar with Alice in the Country of Hearts: it deals with a girl named Alice who ends up being transported to the Country of Hearts, which is filled with characters who are locked in violent territory disputes and who all almost immediately adore Alice. The various manga volumes are based on a visual novel of the same title, and it helps if you approach each manga subseries (?) as though it were a route in the game – nothing except the basics of the situation and world carries over from one subseries to the next.

The Clockmaker's Story is a one-shot in which Alice falls in love with Julius, the Country of Hearts' clockmaker. To get away from Peter and the violence at both the castle and the Hatter Family's mansion, Alice moves in with Julius. She worries that she might be getting in his way, and she knows he's keeping something from her. Still, he's kind, letting her use his bed because it's the only one in the tower. What Alice doesn't know is that there's a secret behind the clocks Julius is constantly fixing.

I enjoyed this volume, although I already knew the big secret Julius was hiding. Julius was great: gruff and trying hard to hide that he was falling in love with Alice because he knew his work made others consider him and those associated with him to be “unclean.” He wanted Alice to be happy but was afraid that she wouldn't be if she stayed with him and became further involved in his life and work.

This volume was more transparently game-based than some of the other one-shots I tried. The crystal vial Alice had to fill up by interacting with Country of Hearts residents was there, and Nightmare even referred to “routes.”

All in all, I enjoyed this very sweet installment in the series, even though I already knew all of its revelations. This was not the first volume I read during my vacation – I think I started with several one-shots illustrated by Job. After Job's mediocre efforts, Mamenosuke Fujimaru's lovely artwork was an absolute relief.