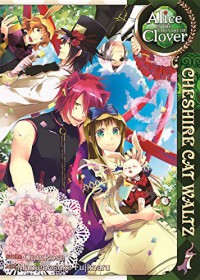 It's the last volume! I read volumes 1 through 6 during my vacation because I didn't realize until it was too late that I didn't have the whole set. Instead of waiting until my next vacation to get the final volume, I decided to request it via interlibrary loan (I'm so thankful for ILL, it's wonderful).

The main story: Alice is working at the cafe while Pierce and Boris enjoy a nice meal. Or rather, Pierce enjoys his meal while Boris picks at his and surreptitiously watches a Faceless customer. Alice becomes concerned when Boris suddenly disappears. He left to confront the Faceless man and put Pierce in charge of keeping Alice safe. However, there are quite a few more enemies in the area than Boris realizes. Luckily for both Boris and Alice, Blood and his gang are well-prepared.

While I think Mamenosuke Fujimaru is one of the best artists involved in this franchise, I have to admit that the action scenes in this volume were confusing. It was difficult to follow what was going on, and the quick shifts between characters and locations – from Boris to Blood to Nightmare to the rival syndicate to Vivaldi, etc. – didn't really help.

One of the Faceless was killed off in order to add a note of tragedy to the ending, something that I think was done in at least one or two of the other routes I read. For some reason, this particular death made me feel more numb than sad. Maybe I've read too many of these volumes?

On a weird note, this volume revealed something I had long suspected, but that, according to my reviews, should actually have been brought up in a completely different route and country. Unless I completely mixed up my notes and wrote my reviews up all wrong, Alice's funeral flashbacks took place in Alice in the Country of Joker: Circus and Liar's Game. All that Cheshire Cat Waltz had was vague memories of Alice's sister trying to tell her something. In this volume, the two memories essentially became linked:

the funeral was not, in fact, for Alice's mother, but rather for her older sister. She blamed herself for her sister's death, and the thing her sister kept trying to tell her was that it was okay, that she shouldn't blame herself, and that it was okay to be happy in Wonderland if she wanted to be.

Which actually made Alice's decision to stay in Wonderland seem much better in this route than it had in several of the other routes, where staying in Wonderland meant Alice had to accept her feelings of guilt about abandoning her real life family.

The main story was nicely wrapped up and ended on a sweet note (with a bittersweet edge due to that Faceless guy's death), and yet I was still left feeling strangely unsatisfied.

The prequel story, set in the Country of Hearts: A group of Faceless attempt to strike at Gowland (or something – I can't remember what, exactly, their goal was, if it was ever stated) by planting bombs throughout his park. Luckily, he got some intel from Blood first and was able to minimize the damage, although several characters almost end up hurt. The Faceless woman with a crush on Boris was involved in the attack on the park and was captured by Gowland's people. To add insult to injury, Boris still couldn't tell her apart from other Faceless. How sad is that?

I actually enjoyed this more than the ending of the main story. Boris's feelings for Alice were still mostly one-sided, since Alice hadn't yet realized how she felt about him and expected to be going home at any moment. Even so, it was pretty sweet. I kind of wish all the “prequel story” parts had been collected together, rather than included at the end of various Cheshire Cat Waltz volumes. As it was, it took me longer than it should have to realize that they weren't brief prequel one-shots, and I didn't pay quite as much attention to them as I should have.

- A 7-page continuation of the main story: I'm not sure if this really counts as an extra. Anyway, it picks up right after the main story. Alice is feeling guilty about the Faceless man who died for her, because she didn't want him to die but is also glad that she didn't die instead. Boris comforts her, and readers get to see a little bit of what happened when the Faceless guy's death acted as a trigger for Alice's memories and almost drew her back into the real world. I'm not really sure I liked this continuation. Sure, fine, it showed that Alice didn't immediately forget the guy who died for her, but it also made her and Boris's happy ending seem much more fragile and bittersweet.

- A 2-page gag comic featuring Alice, Boris, and Ace: Ace tells Alice and Boris a depressing story about a girl sucked into the Cinderella story and forced to experience it over and over, never getting to stay with the prince after she falls in love with him. This reminded me that Cheshire Cat Waltz never really wrapped things up as far as Ace was concerned. In volume 5 he was kind of cruel, and in volume 6 he almost managed what I think would have been murder-suicide. Then he was pretty much forgotten.

- An 11-page preview of Alice in the Country of Hearts: The Mad Hatter's Late Night Tea Party: I could immediately tell that this story had a different artist (Riko Sakura). Sakura's work was prettier than Job's, both not quite up to Fujimaru's level. Anyway, this is one of the few routes I haven't read yet, although I'm sure I'll get around to it at some point. The title seems to indicate that Blood will be Alice's love interest, but all this preview showed was Peter chasing after Alice way too energetically. Oh please let this not be a Peter route.

- Four full-color pages at the beginning of the volume: I liked these. They looked great and were sweet.