The Goblin Emperor by Katherine Addison 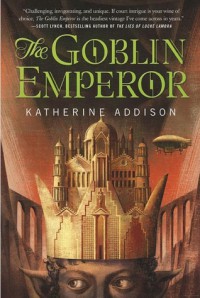 Maia is the unloved half-goblin son of the elven emperor, Varenechibel IV. He has spent his whole life essentially exiled to a remote manor, with only a couple servants and Setheris, his abusive drunkard of a cousin, for company. Then a courier arrives with a shocking announcement: the emperor and all his other heirs were killed in an airship explosion, with the result that Maia is now the new emperor.

Maia's education and training is spotty at best. His knowledge of court etiquette is good, for example, but polite conversation is difficult for him, because Setheris tended to punish him if he spoke too much. He knows too little about the court and is painfully aware of his shortcomings as an emperor. To make matters worse, the airship accident that killed Maia's father and brothers might not have been an accident after all.

I loved this book. I could recognize that there were things about it that wouldn't appeal to everyone, but those things didn't really bother me. My love of Maia and desire to see how things would turn out for him overshadowed it all, and I hated it when life forced me to put the book down and go do other things for a while.

The story was told in third person limited point of view. There were times I wished I could have seen what life was like for some of the courtiers, servants, or ordinary citizens outside the palace, but Addison's POV choice did do a lot to emphasize Maia's loneliness, the enormous and sometimes dangerous gaps in his knowledge, and the limitations of his position (both the reality and how he perceived it).

Maia was a very self-possessed 18-year-old, but not, I think, unbelievably so. I imagine Setheris used fear and/or beatings to drive most of the childishness out of him, and there were still times when he was more rash in his words or actions than he should have been. There was a moment when I was so worried that he'd just made a horrible mistake and was about to make an even worse one that I had to stop reading for a bit, so I could prepare myself. Thankfully, it didn't turn out nearly as badly as I had feared.

Which brings me to one of the things I liked about this book: Addison didn't make Maia suffer nearly as much as she could have. I was so worried about that. I loved Maia for his compassion and his kindness, but I was also afraid that those same qualities would lead to his destruction. Would those he chose to trust betray him? Would the wrong person notice Maia's inability to stay composed around beautiful and confident women and use one against him? Would his repeated efforts to take into account others' wishes before making decisions about their lives come back to haunt him?

There were betrayals and even an assassination attempt, but I didn't feel like Addison made Maia suffer unnecessarily. There were still people in Maia's court who could truly be trusted, and his kindness was revealed to be an asset as it won him even more allies (I should mention that he usually wasn't stupidly kind - there were a few executions, which he made himself attend). I loved the way his future empress gradually warmed to him (and I loved how hot-headed she could be, when she relaxed – I was a little disappointed that there wasn't really any romance and that she didn't get more page-time). I loved the goblin side of Maia's family (Maia's lesbian sea captain aunt needs her own book), although the scenes with Maia and his elven nephew and nieces were great too. I especially loved the relationship between Maia and two of his bodyguards, Cala and Beshelar. The declaration of friendship near the end of the book made me cry happy tears.

Even though The Goblin Emperor worked wonderfully for me overall, it did have some problems. It wasn't the kind of book where the emperor could dress as a commoner and investigate things on his own, and Maia was too constrained by his lack of knowledge and Setheris's lasting effect on him to always know how to use his power effectively. Instead of getting an exciting look at the investigation into the possible assassination of Varenechibel IV, readers mostly got a day-to-day look at Maia being an emperor. It could have been boring, but there was enough going on (rumors about Maia, figuring out character relationships, a proposal for a bridge, the need to choose Maia's future empress, and more) to keep me occupied.

I have to admit that the linguistic details were a bit much, though. I probably wouldn't recommend this book to people who get frustrated with made-up languages because, even for me, there were scenes that felt like a confusing barrage of unfamiliar terms and names. I suppose I could have flipped to the guide or character list at the end of the book, but I hate doing that on my e-reader (one of those areas where paper books still work better for me). As a result, I picked up on some details much later than I would have liked and had trouble remembering who some of the characters were, even near the end of the book. For example, it took me ages to figure out that some words, like Osmer, Dach'osmer, and Mer, were actually titles and not part of characters' names. It also took me a while to figure out that “mer” was used for men and “min” for women, and there were other suffixes and prefixes I never bothered to sort out.

My occasional confusion with the names and linguistic details aside, I thought this was a wonderful book and I wish there were more. I'd love to see what other changes Maia manages to make to his court and country, and I'd love to see more of him and his various friends, family members, and allies.

There were 13 pages (according to my Nook) of additional info at the end: a list of characters, places, things, and gods, and a guide to pronunciation and the linguistic aspects of names, forms of address, and emperor names.