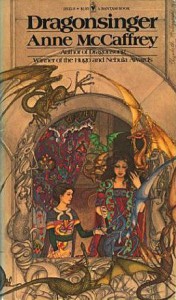 This book picks up right were Dragonsong left off. Menolly arrives at Harper Hall on the back of a bronze dragon, with the Masterharper himself as her traveling companion. The whole thing is more than she could have ever dreamed, but then comes the hard part: making a place for herself at Harper Hall. The Masterharper said that girls could be harpers, but part of her still doubts him and worries that she's only getting a warm welcome because of her fire lizards.

This was another nostalgia reread. Of all the Pern books, this is the one I've reread the most, and not just because I adore Elizabeth Malczynski Littman's cover art. I love fantasy school stories, and that's basically what Dragonsinger is (although the series is technically sci-fi, if you handed this particular book to someone unfamiliar with the series as a whole, they would almost certainly classify it as fantasy). There are no dangerous villains or races against time, just Menolly being tested and then taught by various Masters, making friends and dealing with bullies, and trying to figure out where she fits in.

The entire first third of the book was devoted to Menolly's first day at Harper Hall, and the number of characters introduced was dizzying. I was struck by the realization that, although McCaffrey didn't describe most of the characters in detail, their personalities were so vivid that I felt like I could picture them perfectly anyway.

The last time I played an instrument was in elementary school, and I never practiced enough or paid enough attention to be very good at it. Even if I couldn't always follow the specifics of what Menolly or the Masters talked about, I never felt lost. I enjoyed Menolly's encounters with the various Masters, particularly Master Domick, whose compositions enthralled her. One thing I would have liked to have seen, though, was more of Menolly interacting with apprentices her own age. She spent most of the book having great conversations with various adults at Harper Hall, but she only spent much time with one apprentice, Piemur. For a school story, Dragonsinger didn't have much in the way of Menolly attending actual classes.

Another thing I'd liked to have seen was other female apprentices. Menolly met, and briefly lived with, several female students, but they were there because their parents paid for them to be there, not because they had any actual talent. They were also primarily mean to Menolly. Only one of them eventually became her friend, but, like the other girls, she wasn't very musically talented. Considering how adamant Robinton had been that girls could be harpers too, I'd have expected a few other reasonably skilled female apprentices at Harper Hall.

Not only was Menolly the only female apprentice, she was also massively talented. I had completely forgotten how short of a time span the book covered, only about a week or so, so the events at the end came as a bit of a shock. In all my previous rereads, I don't think it ever occurred to me how odd it was that

Menolly's musical career moved along so quickly and smoothly. I mean, yes, she arrived at Harper Hall with years of Petiron's teachings under her belt, but I'd still have thought she'd have had to wait six months to a year before that particular decision was made, if only to get her used to life at the Hall and lessen the possibility of complaints about favoritism from the other apprentices.

So yeah, this book had some issues, but I still loved it. I loved that Menolly went from a place where she was punished, even beaten, for her love of music to a place where that same love was celebrated and encouraged. I loved that she took on the Masters' tests and challenges and managed to impress even the ones who seemed biased against her. This book was 100% a fantasy about finding that perfect place where your contributions matter and you truly belong, and it still worked excellently for me on that level, despite its problems.

I'm still not sure how I feel about the bits with Camo, one of the few on-page mentally handicapped characters in the Pern series. On the one hand, Menolly, Silvina, and Piemur treated him kindly. On the other hand, some of Menolly's thoughts about him bugged me. For example: "Silvina was just a kind, thoughtful person: look how she treated dull-witted Camo. She was patience itself with his inadequacy." (17) She also thinks of him as a "numbwit" (186).

Part of me feels like I should give this a 4.5-star rating, due to the various problems I mentioned. But darn it, it still works so well for me overall, so I gave it an extra half star for its long-term appeal.