Alice in the Country of Diamonds: Bet On My Heart (book) story by Sana Shirakawa, concept by QuinRose, illustrations by Nana Fumitsuki 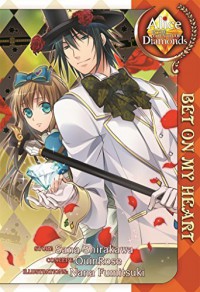 In this book, Alice experiences a “move” and ends up in the Country of Diamonds. Although many of the people are familiar, no one seems to know who she is. The very first people she sees are Elliot and the twins, all of whom try to kill her. Even Blood is suspicious of her, and only starts to unbend a tiny bit after she saves the life of one of his Faceless employees. Alice gradually comes to the conclusion that the Country of Diamonds is Wonderland's past.

Alice settles into the Hatter Mansion as best she can, arranging books in the Hatter family library, attending Survey Meetings, and getting to know this unsettlingly different Blood. Diamonds Blood is a little rougher around the edges than the Blood Alice remembers being friends with in Hearts and Clover, less composed and secure in his position. Part of her wonders if it would have been better for her to stay in someone else's territory, but part of her kind of likes this version of Blood. Still, is it a good idea to get too close to him, or anyone in Diamonds for that matter, when she doesn't have a clue how long she'll get to stay before the next move?

And this is where we get to one of the problems with Bet On My Heart: it's not meant to be the best entry point into the Country of Diamonds. I haven't read any other Diamonds stories, and I haven't played any of the games, but this novel felt exactly like reading one of the Heart, Clover, or Joker one-shots – I could see that information was being left out that was probably better explored in another story. For example, most of the characters mentioned on the “cast of characters” pages barely got any page-time. Joker didn't appear at all. Alice had frequent dizzy spells that I thought were going to lead to either Nightmare or Joker scenes, but in the end nothing happened and her dizzy spells were never explained. Also, Alice discovered evidence that Diamonds maybe wasn't the past at all, but some kind of alternate timeline. This mystery was left unresolved. Readers didn't even get an explanation for the frequent vague comments that Jericho Bermuda, a rival mafia boss, was already dead even though he appeared to be very much alive.

In my past experience with this franchise, I found that the Blood stories were generally the best. I didn't necessarily think he was the best match for Alice, but his similarity to her tutor back in the real world tended to tease out the series' most interesting mystery threads. Unfortunately, that wasn't the case here. Although Alice frequently compared Diamonds Blood to Hearts and Clover Blood, she never once found herself thinking about her tutor, her sister, or her life back in the real world.

That's not to say I didn't enjoy reading this. The romance between Alice and Blood was nice enough, if a bit rushed, and I enjoyed getting to know more about the Country of Diamonds, which I had only seen a tiny bit of in volume 7 of Circus and Liar's Game. The Survey Meetings were much more interesting and tension-filled than the balls in Hearts and meetings in Clover, and I loved that the final Survey Meeting played an important part in Blood and Alice's romance. Oh, and I liked that books were a big part of Alice and Blood's developing relationship. As Blood grew more comfortable with her, he recommended books to her and let her borrow some of the ones in his personal collection. Be still, my heart.

Jericho Bermuda was an intriguing new character, although maybe a tad too kind and likeable, considering that this was supposed to be Blood and Alice's romance. I found myself wishing that Jericho were Alice's love interest any time Blood's mood soured or he hit Elliot with his cane (I don't recall him being that abusive towards Elliot in the other countries, but maybe it just sticks out more in prose than in manga panels?). There were some nice scenes in Jericho's art museum, but I never got to know as much about his dual roles as Gravekeeper and owner of the museum as I would have liked.

I did a bit of checking and, as far as I can tell, this is the only Alice in the Country of Diamonds story that's been licensed and translated into English. Keeping that in mind, Bet On My Heart was a workable if slightly frustrating introduction to this part of the franchise. There were lots of unresolved mysteries and unanswered questions, but at least the romance between Alice and Blood had some good moments.

Like many light novels, this one includes a few black-and-white illustrations. However, it also begins and ends with several manga pages. Like the rest of the novel, the pages are read from left to right, but the artwork is unflipped, so the panels and speech bubbles must be read from right to left. This wasn't explained, and I didn't immediately realize it, so the first two or three pages were a little confusing.

Two color illustrations (both of which are used in the front and back cover art) and an afterword that left me wondering if the “certain something” the author was referring to was Blood's hat or something else.