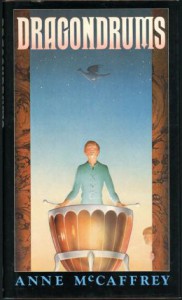 This final book in the Harper Hall trilogy stars Piemur, the young apprentice who became Menolly's first friend at Harper Hall. Unlike Dragonsinger, which took place immediately after Dragonsong, Dragondrums takes place about three years later (it's mentioned that Menolly has had three Turns of instruction from Master Shonagar).

Piemur is looking forward to singing Lessa's part in Master Domick's newest song, but then something horrible happens: his voice breaks. Piemur's voice was the best thing he had going for him, musically, and there's no telling if he'll still sound as good when it finally settles. In the meantime, Masterharper Robinton has a job for him. He wants Piemur to put his natural gossip collection skills to good use and act as his spy, gathering information about the Oldtimers while pretending to be a regular drum apprentice.

Although I've reread both Dragonsong and Dragonsinger several times over the years, I've never once read Dragondrums because, to be honest, Piemur's story didn't interest me. My recent reread of the first two books inspired me to finally finish the trilogy, but I'd still have preferred a third book about Menolly to one starring Piemur.

Dragondrums turned out to be just as readable as the other two books in the trilogy, and in many ways it was more exciting than my favorite of the three books, Dragonsinger. Piemur tried to process the disappointment and uncertainty of his changing voice, learn drum measures, deal with awful bullies, and spy for Robinton without getting caught. I'd have loved a book in which Journeyman Menolly spied for Robinton while composing new songs, but I have to admit that quite a few aspects of this book worked better with Piemur than they would have with Menolly. Piemur was more of a risk-taker and more likely to break rules, whereas Menolly took her biggest risks only after being pushed into a corner.

That said, I didn't like Piemur as much as I liked Menolly. One risk he took was enormous and, as far as I could tell, at least partly inspired by greed. Instead of calling him back to Harper Hall so that he could be properly and rightfully chewed out, Robinton just gave Piemur everything he'd hoped for and wanted. The ending seemed far too easy.

Dragonsong and Dragonsinger told backwards. It was clever (maybe a bit too much so for my tastes), but at the same time it didn't have anywhere near the impact of Menolly's two books, because Piemur wasn't in as precarious a situation. McCaffrey tried to force things by making Piemur's bullies more vicious than Menolly's, and it still didn't feel quite right. At Half-Circle Sea Hold, Menolly was in danger of losing the music she loved more than anything. She was forbidden to play her own songs, she could only compose music in secret, and her own mother saw to it that her hand healed badly so that she'd be physically incapable of playing most instruments. True, Piemur's voice had broken, but there was still a chance he'd sound just as good after it settled. He was doing an excellent job as a drum apprentice, and Robinton himself had given him a job that he was supremely well-suited for. He didn't have the need or desire for a new home that Menolly had had, so the book's ending didn't pack the same emotional punch.

As for the rest, the various mentions of the Oldtimers and of Mirrim and Path made me wish that it hadn't been so long since I'd read some of the other Pern books. I could follow what was going on well enough to understand the story, but I knew there were “big picture” things I was probably missing.

One thing this book gave me that I'd always wondered about was the story of how Menolly and Sebell became a couple. It was...a bit disappointing. Dragonsinger never gave me the impression that Sebell was interested in Menolly as anything more than maybe a future friend. In Dragondrums, Sebell began to show signs of being attracted to her, but the first (and only?) person who noticed was Piemur. Sebell and Menolly becoming a couple was at least partially a result of their fire lizards (I had no idea that fire lizards had the same effect on their humans that dragons do – that has got to be awkward). What I hadn't realized was that, given the chance, Menolly

would likely have preferred to end up with Robinton rather than Sebell, and that Robinton might possibly have felt the same about Menolly. Here's the quote:

“Of course, I know, dear Sebell.” Her fingers lingered on his cheek, his lips. “But you always stand back and defer to our Master.” She did not hide from Sebell then how much she loved Master Robinton, nor would that have ever come between them since they each loved the man in their separate ways. “...but I have so wished–” (220)

I'm...not sure how I feel about this. I always thought of Robinton as Menolly's idol and surrogate father.

Anyway, it's tough to say whether I'd have liked this book more if it had had the years of nostalgia attached to it that Dragonsong and Dragonsinger had. I think I'd have still viewed it as the weakest book in the trilogy – still an enjoyable read, but not as good as the other two books.