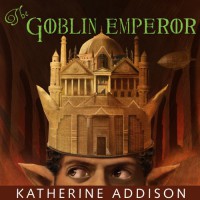 I read and reviewed the e-book version of The Goblin Emperor only a month ago, so I'm not going to go into too much detail in this review. If you'd like info about the story and how I felt about it, check that review out. My feelings aren't that much different after listening to the audiobook. Here are some new things I can say:

Even though I loved this book enough to immediately look it up on Audible, I wouldn't have bought the audiobook if the narration had irked me. Kyle McCarley was a great fit – he sounded like he could be Maia, and he did a good job differentiating between the various characters. I didn't compare his pronunciation to Katherine Addison's pronunciation guide, so all I could really note was that the way he pronounced Maia's mother's name was correct (I distinctly remember that one, because I realized part of the way through the book that I'd mentally been pronouncing her name wrong, the way the elves would have rather than the way the goblins would have). His pronunciation of everything else seemed consistent, and I don't recall him stumbling over the names or fantasy words even once.

Listening to this book so soon after reading it made me more aware of how slow parts of it were, but I also found that I could enjoy it in a different sort of way this time around. During my first reading, there were times when I was tense and worried for Maia. I didn't know if he was trusting the right people or doing the right things. This time around, I knew exactly who he could trust and where all the pitfalls were. Instead of fretting, I could sit back and enjoy Maia and his budding relationships, because I knew that things would turn out mostly all right in the end.

I listen to all my audiobooks at work, over my computer speakers. Thankfully, I have an office with a door. Only one scene, a very bloody suicide, would have made for awkward work-time listening. I also found that the story affected me just as much this time around as it did the first, so there were happy tears at the end.

As good as this was, I'm still glad that I read it before listening to it, because a lot of the names probably would have gone right over my head, otherwise. Completists should also be aware that the additional info at the end of the book (list of characters, places, things, and gods, and a guide to pronunciation and the linguistic aspects of names, forms of address, and emperor names) is missing from the audiobook. Granted, a lot of it would have been unnecessary or annoyingly belated in the audiobook, but it's the kind of stuff I like having at least the opportunity to look through.