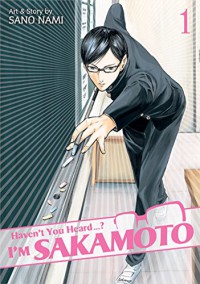 Sakamoto, a new and popular student, coolly and calmly deals with jealous bullies, a wasp, a kid who keeps getting bullied for his lunch money, a scheming girl who wants to make him her boyfriend, and a guy who uses him and other students as his slaves. There's also an extra story called “Broad Shoulders” that I think is unrelated to this series, but it's hard to tell because the main character looked an awful lot like Sakamoto. At any rate, the kid in that story was being bullied for his shoulder pads for some bizarre reason.

I found out about this series via a review somewhere, and I was really excited about it. I figured it would be humorous and weird. Instead, the humor generally fell flat, and the whole thing was weird in an uncanny valley sort of way. The characters looked just “off” enough that I was too busy being creeped out to enjoy this much. I really wasn't a fan of the artwork, which was a little too stiff for my tastes.

Some of the stories were also disturbing enough to make me question whether I have this series' genre wrong. In the story with the kid whose lunch money was being stolen, for example, Sakamoto wouldn't help him until after he'd gotten a job. After the kid tried to stand up to his bullies himself, he told Sakamoto that the lesson he'd learned was this: “I don't need to protect myself or my money, only my pride.” I sort of understand what Sano was trying to get across here, but still...fighting against his bullies could have landed him in the hospital or even gotten him killed if Sakamoto hadn't swooped in to help. In the first story, several bullies tied Sakamoto up and planned to strip him down, take pictures, and send the pictures to everyone. And I still don't know what to think about the story with the guy who was making other students his slaves.

It also bugged me that Sakamoto didn't seem to be interested in helping people so much as studying them and testing his theories about human behavior. There were indications that Sakamoto wasn't human. He refused to say his given name, the only information he gave about his past was that he'd once attended a place called “Innocence Academy,” and he had inhuman physical abilities. He might be a robot, or an alien, or something else entirely. At this point, my best guess is that he's an alien, living on Earth specifically to study human behavior.

If I do continue reading this series, it'll primarily be for the mystery of Sakamoto's origins and identity. None of the other characters were at all interesting or very memorable, Sakamoto's solutions to various situations weren't really that big of a draw, and the artwork kind of creeped me out. I really don't know what Sano was going for here. I mean, the series also included a lot of what I'd normally call fanservice, with many panels of shirtless or barely clothed Sakamoto and other characters, but it wasn't so much sexy as it was discomfiting and vaguely disturbing.

That said, there were still a few nice moments. For instance, I liked the panel in which Sakamoto demonstrated that he could easily remain in a seated position even after his chair had been stolen out from under him.