Princess Princess Ever After (graphic novel) by Katie O'Neill 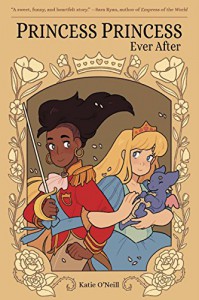 When Princess Amira stops to save Princess Sadie from the tall tower she’s been imprisoned in, Sadie almost turns her away. So many others have tried to save her, but all have failed. However, Amira is enthusiastic, determined, and in possession of both a grappling hook and an incredibly strong cookie-loving unicorn.

That’s just the beginning of Amira and Sadie’s adventures. Along the way, they make some new friends, Amira learns more about being a hero, and Sadie finds the courage to face her sister and rule her kingdom.

I bought this because I heard it was a sweet f/f graphic novel. It was super cute, although a bit too short for my tastes. I wanted more pages devoted to Amira and Sadie getting to know each other - Sadie’s “I trust you” happened very early on and was a bit jarring. When the villain appeared and disappeared in the space of about a page, I started worrying that the pacing of this graphic novel just wasn’t going to work for me.

One thing I liked was that Sadie’s sister’s magic was changed from purple to black - it looks creepier in the print version. One thing I didn’t like was that the print version’s colors were slightly less bright than in the original web comic. Not only is this the sort of story that’s practically made for bright colors, some of the panels just weren’t as clear in the print version. Considering that this graphic novel had several black characters, a bit more attention should have been paid to whether they’d still show up okay in panels with darker backgrounds. The panels featuring Prince Taji were really dark - his skin color seemed to almost be the same shade as the wall behind him, resulting in him blending into the background too much. In the webcomic he was perfectly visible, and I could see that he actually had some shading.

The print version includes a 3-page epilogue that isn’t present in the original webcomic. I’m really glad that O’Neill added it. It doesn’t just serve as extra content for folks who’ve read the webcomic, it also makes it clear that, yes, Amira and Sadie are not only a couple, they also get a nice little happily ever after just like any other fairy tale couple.

This was a fluffy and sweet graphic novel about two different princesses becoming more capable in their own ways and falling in love in the process. I wish it were maybe twice as long and that the print version’s colors were a little brighter, but overall this was a good read.