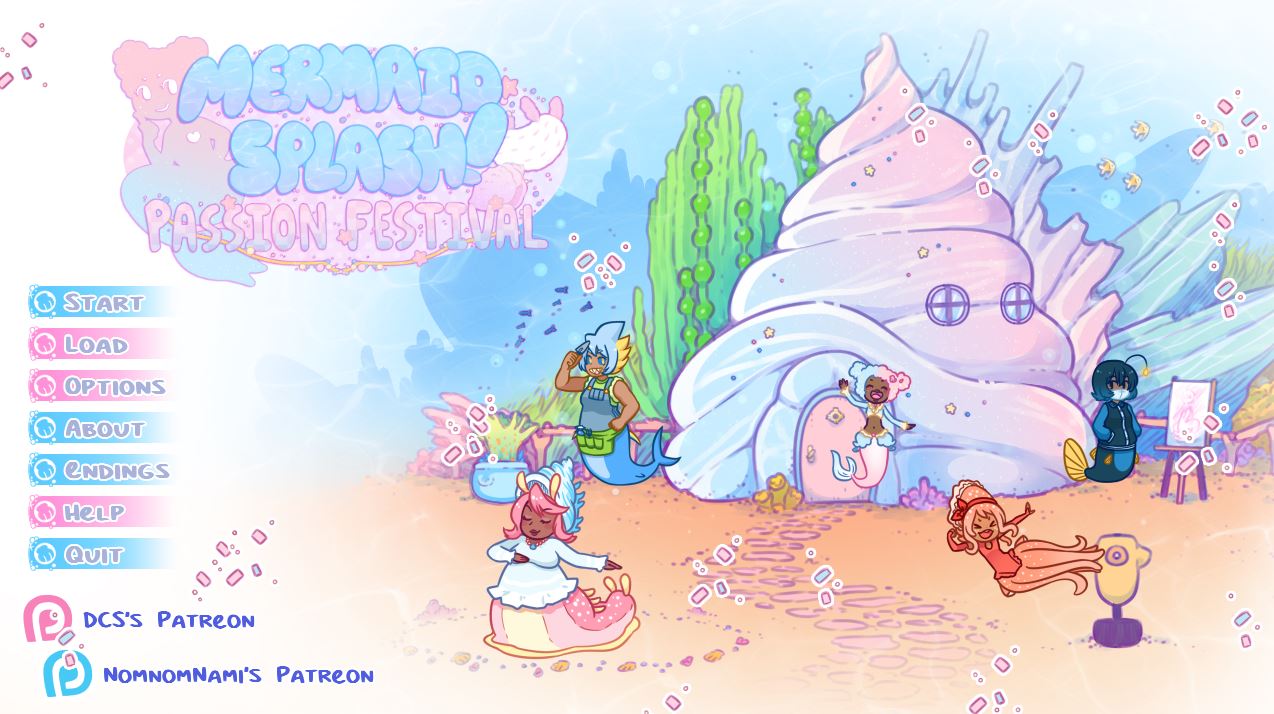 CiCi the mermaid has decided that she’s going to finally take part in the Passion Festival. There’s only one problem: although CiCi has many interests, she’s never really focused on one particular hobby. In order to make a good showing at the festival, she’ll need to pick an interest (martial arts, gardening, dance, or painting) and stick to it. Will she be able to hone her skills in time, and maybe even find love along the way?

When I first heard about this, it sounded like it could be my next Robo-Tea, cute, sweet, and relaxing. While I did end up liking the game overall, it didn’t quite turn out to be what I’d expected. Almost all of the character routes involved jealousy of some sort, usually creative jealousy. As a result, MSPF wasn’t quite as fluffy and relaxing as I’d hoped.

When I first started playing, I was worried that this would be a stat-building game like Roommates and similar visual novels. It wasn’t, despite the “plan out CiCi’s week” screen. Gameplay was pretty simple. The entire thing took place in the space of four weeks, and each week you could choose which hobby CiCi spent time working on and who she’d spend time with on the weekend. After you made your choice, it was time to sit back and read as CiCi interacted with one of her four friends - there were absolutely no decision points or conversation choices.

This threw me off a bit, because almost every route had a tense moment that made me feel like I’d done something wrong, even though there were no conversation options and therefore nothing I could have done differently. Angie the anglerfish responded badly to gentle criticism of her habit of never finishing her comics writing/illustrating projects. Delora the sea slug was upset when CiCi told her she should quit her day job and pursue her true passion. Bea the cuttlefish didn’t take well to being defeated in a practice bout. The only one who never got upset with CiCi was Maka the shark, which was a large part of the reason why I liked her route the best. Although CiCi and her friends made up on the weekend or at the start of the next week (if you were focused on one particular hobby and friend), I still found myself wishing there were dialogue options that could allow me to handle those conversations differently.

Although a single playthrough didn’t really take that long, I’m the sort that likes to try to get all of a visual novel’s endings unless I get emotionally invested to the point that hunting down the “bad” endings becomes too painful. In this respect, the game turned out to have far more to it than I originally realized. I hadn’t bothered to reread the product page, so I missed that there were 23 endings, 8 unlockable outfits (which had no effect on the story, but were cute), and 52 random events. The unlockable outfits were easy enough to get, and I didn’t have the patience to try to get all 52 random events, but I really, really wanted to get all 23 endings. This wasn’t as easy as I thought it would be.

Each playthrough usually resulted in two endings: the Passion Festival ending (how CiCi did in a particular Passion Festival event) and the romance ending (whether CiCi ended up in a romantic relationship with someone). Each of the four romance options also included “friendship” endings, which, sadly, I disliked. It wouldn’t have been hard to write these endings as true close friendships, but instead every single one of them included CiCi feeling like she’d missed out on something and thinking she’d have preferred her Passion Festival outing with her friend to be a date. It was a little depressing.

The gardening route was probably the biggest stretch for me. I found it hard to believe that CiCi could produce a prize-worthy specimen in only four weeks, even considering that it was a transplanted plant. Still, since I loved Maka so much I was willing to ignore that. I initially found her multiple rows of teeth to be more than a bit off-putting, but she was so cheerful and awkward that I ended up loving her anyway. I also enjoyed her romance ending: her choice of date activity was wonderful and very fitting. My second favorite route was probably martial arts and Bea, my third was dancing and Delora, and my least favorite was painting and Angie.

Bea was a little too prone to bragging for my tastes, but her story was one of the more interesting ones. CiCi struck me as being way too immature for someone like Delora to be happy with for long, and Angie’s route reminded me that it is often a bad idea for friends to critique each other’s creative works. It bothered me that, after Angie got mad at CiCi the first time she attempted to voice a bit of criticism, CiCi censored herself during a later scene and said that she wouldn’t change a thing about Angie’s work. I also worried about CiCi’s repeated insistence that she and Angie collaborate on a project - Angie didn’t seem to be completely on board but at the same time appeared to be unwilling to say so and, plus, I felt the two of them would be better off doing their own thing, artistically.

Art-wise, MSPF was absolutely wonderful. All the sprites were cute and pretty (although, if the product page hadn’t said that the characters were 24, 26, 35, and 43, I’d likely never have guessed it, since the sprites usually made them look much younger). The event art was great too, although I could tell it had been done by a different person, and I loved the pretty backgrounds. A couple routes seemed to reuse artwork more often than the others, but there was so much artwork packed into this game in general that I didn’t mind.

It was clear that a lot of work had been put into this. There were a few spots where I felt the writing could have been tweaked and the jealousy moments bugged me a little, but it was generally a fun and slick visual novel with lots for “ending hunters” to dig into. I was so proud of tracking down those final three endings! (Hint: the last ending can only be achieved after finding the other 22.) It’s too bad that the only romantic option I 100% enjoyed was Maka, but the others weren’t necessarily bad, just not my cup of tea.

- This probably counts as a spoiler since it isn't mentioned on the product page and doesn't come up until several weeks into CiCi's interactions with the character, but I feel I should mention that one of the romantic options is a trans woman, since this will probably be an appeal factor for some players/readers.

- Each character had their own dialogue sound effect, which I usually thought was a nice touch. Unfortunately, something about Bea's sound effect grated on my ears.

- I wish that the text colors had occasionally been a bit darker - sometimes the text was a little harder to read than it should have been.

I'll close with a screenshot of Maka being sweet, friendly, and helpful. She's the best. ♥ 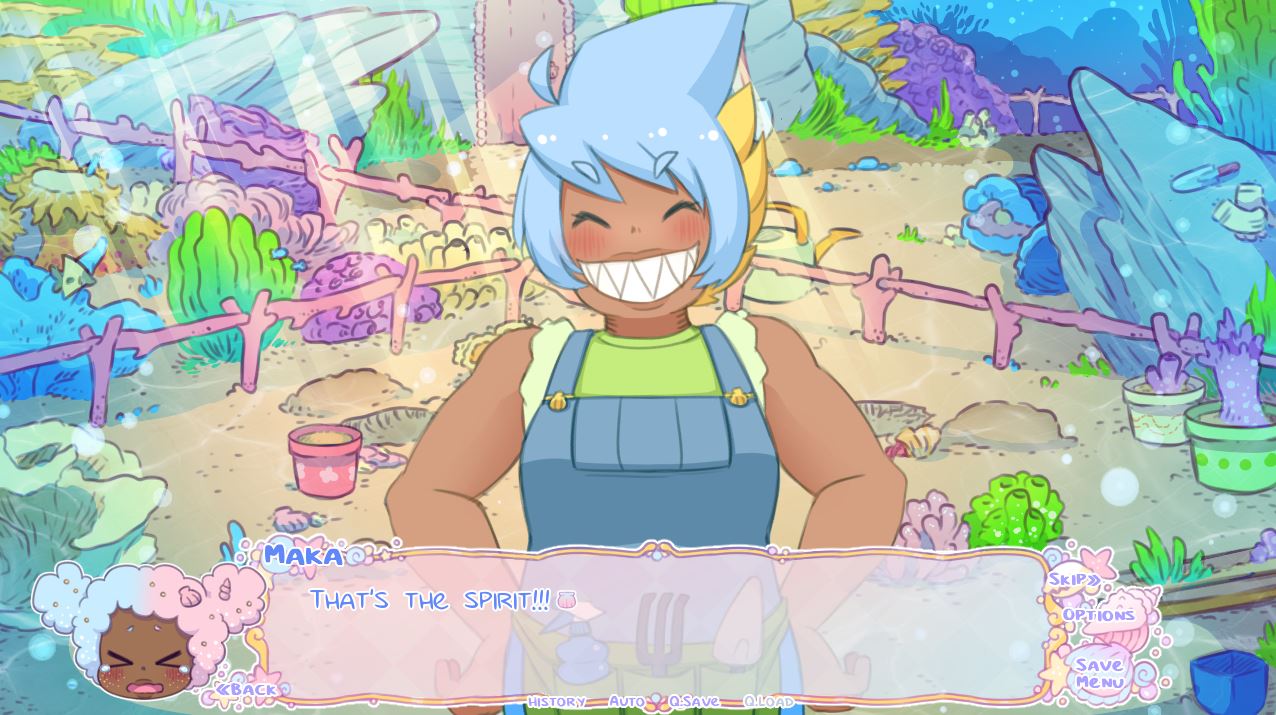