Alice in the Country of Hearts: My Fanatic Rabbit (manga, vol. 2) story by QuinRose, art by Delico Psyche, scenario by Shinotsuki, translated by Ajino Hirami 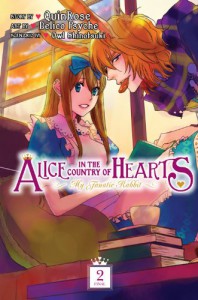 Peter saves Alice from being beheaded by Vivaldi, and Elliot takes Alice back to the mansion. Alice and Elliot are suddenly a lovey dovey couple, but things take a turn for the worse when Alice spends time with Ace and Julius. She learns about the clocks, and that Elliot

was once in prison for irreparably breaking his friend's clock. Elliot gets mad at Alice for being chummy with Julius, the man he hates, so Alice decides that she should drink the vial and go back to her world and her sister. However, Nightmare intervenes with a vision of Elliot killing himself after Alice leaves, so she decides to stay.

This started off as a mediocre series, featuring one of my least favorite Alice in the Country of pairings, and then took a turn for the much worse. First we have attempted rape on Elliot's part -

he begins to force himself on Alice in anger after she spends time with Julius, his enemy.

Then we have Nightmare's emotional manipulation of her.

Alice was going to leave Wonderland for good, and for a very good reason (a borderline abusive boyfriend). In order to stop her, Nightmare produced a vision of Elliot killing himself out of thin air. It reminded me of the horrible boyfriend a family member of mine used to have, who'd try to get her to stay with him by telling her he'd kill himself if she left.

Not only that, the way the story was told was choppy and just plain bad - it went from Elliot taking Alice back to the mansion to them being a couple in the space of a page or so. I also felt that the artwork took a bit of a nosedive, becoming scratchier and less appealing.

If this were a horror series, it'd be one thing, but these stories are supposed to be romances, albeit occasionally kind of dark ones. This was garbage.