Books Can Be Deceiving by Jenn McKinlay 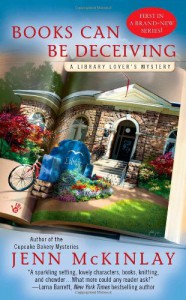 Lindsey used to be an archivist at the Beinecke Rare Book and Manuscript Library at Yale until about six months ago, when she was laid off. She's now the director of the Briar Creek Library. She's just starting to feel more comfortable with small town life and her new position. It helps that one of her employees, Beth, is also her friend from back when they were both getting their library science degrees.

Beth is a children's librarian who's been working on a children's book of her own for several years. Lindsey thinks Beth should show her work to a New York editor who's vacationing in Briar Creek, but Beth is hesitant - her horrible boyfriend, Rick, keeps telling her it isn't good enough and needs a lot more work. Since he's a famous author whose first book won the Caldecott Medal, he'd know, right? When Beth tells Rick about her plans to meet with the editor, things rapidly sour between them. They break up, but the situation only gets worse after Beth hears what the editor has to say. She attempts to go to Rick's island and give him a piece of her mind, only to discover that he's been murdered. Unfortunately, Chief Daniels seems to consider Beth his top suspect.

A coworker of mine highly recommend this series to me. She basically inhaled what's been published in the series so far. She enjoyed the library aspects, the romance with Sully (she mentioned the love triangle that pops up in a later book, so I already know to expect that), and the fact that Lindsey is fairly similar in age to her (and me, too!).

My feelings about this book are more measured, but I enjoyed it too. The library aspects were great, even though there were a few things that made me raise an eyebrow. The odds of Lindsey getting an archivist job at Yale right out of library school seemed incredibly slim, based on what my job hunt 9 or 10 years ago was like. Then again, this was published in 2011, so maybe such a thing would have been more likely in the early 2000s. I also raised an eyebrow at the way Lindsey handled Beth's situation. I couldn't help but wonder if she'd have been as quick to promise Ms. Cole, aka "the lemon," she wouldn't suspend her if she had been the one accused of murder. Having your best friend as one of your employees can mess with your judgment.

That said, most of the details were great, like the random phone call from a vendor selling a database the library neither needed nor could afford, the couple arguing over which movie to check out right before closing time, and Lindsey's "crafternoons" idea. I can add this to my short list of books that star librarians who actually do occasional on-page library work.

The mystery itself was good, with a few twists I absolutely did not expect. I did wonder about the bit where Lindsey and Beth left town to do some investigating on their own. Would Beth have been allowed to leave like that?  Detective Trimble seemed more open to other possibilities, but Chief Daniels certainly considered her a suspect.

I'm looking forward to more developments in the romance between Lindsey and Sully, although I'm already dreading the love triangle. Sully seems like a great guy, and I could think of a lot of things that could complicate his and Lindsey's relationship without a love triangle being added to the mix. For example, Lindsey is still dealing with the hurt and betrayal of discovering that her fiance was cheating on her, which unfortunately happened at around the same time she was laid off.

All in all, this was an enjoyable and quick read. I definitely plan on reading the next book. In fact, I already have a copy in via interlibrary loan.

At the end of the book there are several extras, including "The Briar Creek Library Guide to Crafternoons," a reader's guide for The Last Time I Saw Paris by Lynn Sheene, a knitting pattern for the rolled hat Lindsey made (which was originally supposed to be a sock), a recipe for Sully's hot chocolate, and a recipe for Mary's clam chowder. The crafternoons guide could come in handy for public librarians looking for adult programming ideas.

For my part, the only extra I've used is the recipe for Sully's hot chocolate, which I've now made several times (with powdered cinnamon instead of sticks, and no nutmeg). I disagree with Lindsey's assessment that it isn't too sweet - after my first time making it, I cut the sugar back by half. I suggest halving the recipe if you just want to make enough hot chocolate for yourself. It's a very rich drink, and halving it makes enough for one good-sized mug.