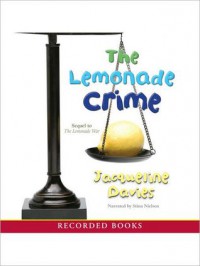 I'm enjoying this more than I expected. It's basically Middle Grade legal fiction. Evan and his younger sister Jessie are both fourth graders, but that's because Jessie skipped a grade. Jessie is particularly good at math, very focused, feels strongly that things should be fair, and believes that rules are meant to be followed.

Evan believes that one of the boys in his class stole over $200 from him and used the money to buy a new game console, but he can't prove it. Jessie decides to set up a court of law, with members of their class as witnesses, jurors, audience members, and the judge. She'll be Evan's lawyer, and the other boy says he'll defend himself (he was given the option of selecting a lawyer from the audience, but they're all girls and he didn't want a girl lawyer).

When I read about the trial in the description, I assumed it'd be a mock trial set up by the class's teacher for some some reason or another. Seeing Jessie try to set everything up herself (using a pamphlet that gives an overview of the US legal system) is fun. I have a feeling that Jessie is the sort of girl who occasionally has trouble sleeping because she can't get her brain to shut up.