On Borrowed Time by Jenn McKinlay 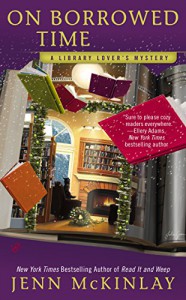 In this entry in the series, Lindsey is setting up for one of the Crafternoon meetings that these books always begin with, only to discover her brother, Jack, hiding in their meeting room. At Jack's request, she doesn't tell anyone about him, lets him stay in the room, and makes up an excuse to have the Crafternoon meeting somewhere else. She's both shocked and worried when she goes to check on Jack and discovers that 1) he's gone and 2) there is now a dead man in the meeting room.

Lindsey is sure Jack didn't kill the man but knows it looks bad, so she reports the body to the police but doesn't mention Jack. She soon learns that Jack is involved in something very dangerous. If she wants to rescue her brother, she has to somehow figure out what's going on and who she can trust.

Jack apparently lives an overly exciting, globetrotting, and sometimes action-filled life. There were things in this book that made me think of James Bond - a coffee cartel, a dangerous and beautiful woman, and a boat chase. With all that action and Lindsey's worry over Jack, the murder at the beginning of the book was almost forgotten. Yes, I know it was part of the whole storyline involving Jack, but it didn't feel as much like the book's focus as the series' previous murders did. I was a bit disappointed by that.

In general, I found this book to be extremely frustrating. While I get that Lindsey was worried about her brother, her behavior made no sense. In the book just before this one, Emma Plewicki, the new police chief, demonstrated that she could keep secrets and wait for just the right moment to pounce. She's always been level-headed, careful, and trustworthy. I could sort of understand Lindsey stupidly leaving out her brother's sudden appearance in her initial report to the police, but her continued refusal to talk to Emma when things with Jack took a turn for the worse was just bone-headed. In a small town like that, there were ways she could have communicated with Emma that wouldn't have alerted Jack's kidnappers. But that would have required Lindsey to step aside and allow Emma and others to assume control of the efforts to save Jack, which McKinlay couldn't allow.

A lot of the things that were wrong with this book were due to McKinlay bending over backwards to make things more difficult for her characters. In addition to Lindsey's repeated refusal to involve the police, there was also the issue of the love triangle. I suspect even McKinlay didn't have much interest in Robbie as a potential love interest for Lindsey, because this was his second book and he still didn't have much going for him beyond being a good-looking charmer. And I couldn't help but wonder if Lindsey's primary appeal, for him, was that she kept resisting him.

Robbie and Sully's constant arguments about who should get to spend time with Lindsey and what rules they should be operating by grated on my nerves. There were a few nice scenes with Sully, including one where he finally talked about the event in his past that made him freak out when he thought Lindsey might still have feelings for her ex-fiance (I still think this was sloppily done), but they were always ruined by his arguments with Robbie. They were like two dogs fighting over a bone.

This is my least favorite book in the series so far, and if it weren't for how popular this series is with a few of my coworkers, I'd probably be quitting at this point. But I do like having books I can actually discuss with the people around me, so I'll be giving the next book a go. Here's hoping that at least the mystery portion of the next book is better.