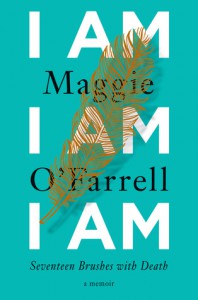 The current section highlights one of the issues I have with this book: the premise doesn't really hold together all the way through. It's like O'Farrell had two or three good autobiographical death-related stories she wanted to tell, but even she couldn't figure out how to spin them out enough to fill up an entire book, so she picked out a bunch of other stories as filler.

The title mentions seventeen brushes with death. To me, this makes it sound like the seventeen brushes with death are in some way significant, life changing moments for the author. And several of them are. But quite a few of them are just scary moments, the sort that might make a nice, quick, scary story to tell someone - "There was this time I almost drowned, OMG!" or "You know those shows where someone throws knives at a person while blind-folded? I was once the person who had knives thrown at them!" Except that O'Farrell writes about each one of these times as though they have roughly the same emotional weight as, say, her miscarriages or her encounter with the man who later murdered someone.