The Avengers and the Thunderbolts (book) by Pierce Askegren, illustrations by Mark Bagley & Jeff Albrecht 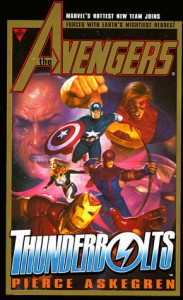 Baron Wolfgang von Strucker and Baron Zemo forge a temporary alliance to...accomplish something. I didn't really follow along very well. Something about Hydra (Strucker's folks) gaining power and Zemo gaining access to research Strucker had acquired that's based on work originally carried out by Zemo's father.

The Avengers first become aware that something's up when the Scarlet Witch and Wonder Man's date is interrupted by an apparently indestructible Dreadnought. Wonder Man is kidnapped. At approximately the same time (I think), the Vault, which used to be a maximum security prison intended for supervillains and is now being modified to house broken/inactive supervillain technology instead, is broken into by Hydra. The Thunderbolts just happen to be in the area, for reasons I can't recall.

Strucker, Zemo, and Techno manage to produce a mindless and obedient super-powered army of creepy golden people. The Avengers and the Thunderbolts have to work together and somehow figure out how to defeat them and foil whatever it is they're planning.

This was published back in 1999 and begins with an editor's note stating that it takes place shortly after the Marvel comic Avengers (Vol. 3) #12. I haven't read an Avengers or Thunderbolts comics in at least 10-15 years, so this information didn't really mean anything to me. What I can say is that it seemed to take place after the Thunderbolts comics I vaguely remembered reading. In the ones I read, the Thunderbolts were still villains under the direction of Baron Zemo, pretending to be superheroes. In this book, the Thunderbolts have been found out and are trying to figure out how to clean up their image, regain people's trust, and become true superheroes, with Hawkeye as their new leader. As far as the Avengers chronology went, the Scarlet Witch and Wonder Man were dating, and there was a bit of tension between them and the Vision.

I've owned this book for ages. Every time I thought about getting rid of it, I felt a burst of vaguely remembered fond feelings for the Thunderbolts and just couldn't do it. Now I've finally read it and...meh.

There was so. Much. Exposition. So much. I don't know if Askegren thought it was a good idea or if Marvel required him to include it, but it bogged things down and still didn't provide me with quite enough information to get a good handle on all the characters, their relationships, and any other relevant background info. I spent a lot of time browsing Wikipedia pages.

There were hints of character relationship info that interested me a lot more than anything Strucker and Zemo were doing: MACH-1's worries about going to prison and leaving Songbird; Moonstone's shadowy motivations; Jolt and Atlas's sibling-like relationship; Hawkeye's empathy for the Thunderbolts; and the tension between Scarlet Witch, Wonder Man, and the Vision. But the book wanted to focus on the Avengers and the Thunderbolts vs. Strucker, Zemo, and Techno, so that's what I got.

Even if the things that most interested me had gotten more page-time, I'm not sure how enjoyable they would have been, due to the limited page count and many, many characters. A few people got a little more page-time than others, but I don't think that anyone in particular stood out. Iron Man battled a Dreadnought. Thor stepped in and provided assistance multiple times. Techno and the Vision fought one-on-one. Askegren occasionally reminded readers that Firestar and Justice existed. Jolt worked undercover at a fast food place (it was the only place where they figured a teenager wouldn't stick out like a sore thumb). Captain America spent some time tied up, and Moonstone enjoyed it more than someone who wanted to be seen as a superhero probably should have. Wanda (Scarlet Witch) and Simon (Wonder Man) went on a date at a monster truck rally. As soon as I got my bearings with someone, the narrative switched to someone else.

All in all, this really wasn't for me, and I'm not sure it would have been that much more appealing if I had read it back when I was plowing through my uncle's boxes of comics.

Each chapter begins with a black-and-white illustration. The book ends with a chronological list of Marvel novels and anthologies published by Byron Preiss Multimedia Company and Berkley Boulevard Books between October 1994 and May 1999.