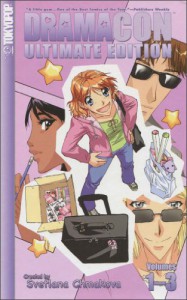 Christie is an amateur manga author with vague dreams of making it big one day. In the meantime, she just wants to have fun at Yatta Con, her first big manga/anime convention. Unfortunately, her boyfriend and artist (they're co-creating original English-language/OEL manga) is being a jerk, practically drooling over every pretty cosplayer who comes to their table. Matt, the good-looking cosplayer manning the table next to them, annoys her with his snarky comments, but she finds herself turning to him more and more as things deteriorate between her and her boyfriend. Matt's attitude may be a bit abrasive, but he and Christie just sort of click in a way that Christie and her boyfriend don't.

Each of the next two volumes take place a year apart, at the next Yatta Cons, following the ups and downs of Christie and Matt's relationship, Christie's con-going experience, and Christie and her friends' prospective manga careers.

This was a reread, but my last time reading this series was so long ago that I'd forgotten a lot of specifics. I vaguely remembered thinking that the romance didn't quite work for me. My feelings about it haven't changed - Christie and Matt are cute together and all, but it bugged me that, by the end of the series, they'd spent a grand total of maybe 8-9 days in the same physical space. If they'd spent the time between Yatta Cons talking over the phone or online, it wouldn't have been quite as big of a deal, but they hadn't even done much of that. Christie tried calling Matt once between volume 1 and volume 2 but chickened out when someone else answered. Matt and Christie talked a little just prior to volume 3's Yatta Con, and Matt read Christie's blog (which mortified Christie when he finally commented for the first time), but there were still a lot of things they didn't know about each other and hadn't talked about when they met up again at the convention.

So, I didn't think the series' format worked well for its primary romance, but I at least felt other aspects of the series were much stronger. Chmakova's depictions of Yatta Con and Christie's experience of it, particularly her first time going, were great. Volume 2 was more dramatic, touching on folks who don't consider OEL manga to be "real" manga, racism, and fans who don't respect cosplayers' boundaries and hug or take pictures without asking - not inaccurate, but maybe a bit much in a single volume. There was also a nice ongoing storyline involving Christie's new artist, Bethany, who yearned for a career as a manga artist but whose mother wanted her to have a career that was more likely to produce a stable income.

Dramacon wasn't bad, but it didn't give its primary romance enough room to breathe and really feel like something that could last. As with Nightschool, one of her later series, it had a lot of promise but didn't quite hit the mark.

This edition of the series contains a lot of previously unpublished material. I'm not sure which bits were new and which weren't, but I didn't recognize the multi-page comic featuring Matt and Christie's first real date (all in Matt's POV, which was kind of nice). There were also a few author's notes, comics featuring a little behind-the-scenes info, fan art, some four-panel comics, and an interview with Svetlana Chmakova with early concept art for the series. Even if you own the original three volumes, the extras in this omnibus are worth checking out if you're a big fan of the series. I only wish the fan art could have been in color.