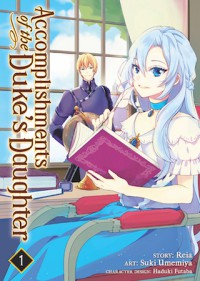 The series' unnamed heroine is a young (youngish? one of her coworkers calls her ma'am) office worker at a tax firm who stayed up all night playing her favorite otome game. She has to work late and, on her way home, doesn't pay close enough attention to her surroundings and gets hit by a car. She wakes up in the body of Iris, the villain of her favorite otome, in the middle of a climactic scene that she knows will result in her banishment to a convent. She alters Iris's original choices just enough to prevent this from happening and is instead sent away to the family's fiefdom. Her father (Iris's father) develops a sudden progressive streak and makes her, rather than her older brother, the acting fief lord.

Iris is accompanied by her four most faithful servants, people she once rescued from terrible lives and fates. Her first goal is to inspect the various regions on the fiefdom, particularly the most and least prosperous cities.

I picked the first few volumes of this series up because I actually wanted to read a different series but couldn't. More specifically: There is a glut of "transported to another world" light novels starring ordinary guys, so when I heard that My Next Life as a Villainess: All Routes Lead to Doom! existed and starred an otome-loving female main character who ends up reincarnated as the villain in her favorite otome, I really wanted to read it. It's currently available in e-book form, but I'd need to break my "no DRM" rule to get it, which I refuse to do. I thought it was coming out in paper form in August, but that may just be the manga adaptation.

So I bought a few volumes of this manga series, which also stars an otome-loving female main character who ends up in the body of the villain in her favorite otome, and which I believe was also based on a light novel series. I have no idea how the two series compare. I suppose I'll find out, eventually. If this isekai light novel/manga glut continues, I hope that it leads to the licensing of more series starring women. Crossing my fingers that they don't all star women being reborn into the bodies of the villains in their favorite otome games.

Anyway, this first volume of Accomplishments of the Duke's Daughter was...okay. The artwork was reasonably attractive but seemed to be a bit light on backgrounds. As for the story, there was nothing particularly bad about it, but also nothing particularly good or noteworthy.

I liked that it seemed to be part of the subgenre I call "economic fantasy" - at the moment, there's more emphasis on Iris learning the economic conditions of her new home than on Iris's love life. Which isn't to say that romance won't happen. I'd be surprised if it didn't, considering the series' premise, even if the heroine was reborn as the villain and not the protagonist.

Two of the four servants closest to Iris have gotten flashbacks to the time prior to their becoming part of Iris's household. I assume the others will get flashbacks soon enough. Right now my favorite of the four is Tanya, whose backstory makes me think of Kaoru Mori's Emma. If I had to pair Iris off with anyone at this point, it'd probably be Tanya, although I doubt the series is going to go in that direction.

So far, at least, the "reincarnated in an otome game" elements are so light as to almost be unnecessary. The heroine's past as an office worker at a tax firm allowed her to plow through large stacks of financial documents far more quickly than the real Iris would have been able to do, and her knowledge of the game helped her prevent Iris from getting sent to the nunnery. But the series could just as easily have been basic fantasy starring a heroine who secretly studied economics and accounting in the hope of one day getting to use that knowledge to help her family and her people. I have no idea if Reia plans to do more with the series' premise (either the otome game aspects or the things the heroine knows because of her real world life), or if it was only intended to get the ball rolling and smooth over anything that readers might have otherwise questioned Iris knowing.

I don't have too much to say right now about Iris's plans for the fiefdom. Well, I did roll my eyes a bit at Iris's discovery of potential source of income for one region. It struck me as demonstrating a colonial mentality. The locals used the product but viewed it as worthless to anyone but themselves, resulting in Iris being the first one ever to consider how to market it to others? Sure, uh huh.

I own the first three volume of this series, which I figured would give me more than enough time to figure out whether it's worth sticking with or not. It hasn't yet managed to win me over, but I don't regret having a couple more volumes in my collection to read.

"Womanly Secrets" by Reia, a 5-page short story in which Iris's female servants try to set up a girls' day out but find themselves missing Iris. I found it to be a bit much. Also, it emphasized that Iris doesn't actually feel like an otome game villain - everyone loves her so much. It's tough to believe that the original Iris ever bullied the protagonist, even just out of jealousy, and there's no sign that any of the characters even vaguely suspect that the gentle and studious Iris they're speaking to now isn't the Iris they knew a week ago.