My Next Life as a Villainess: All Routes Lead to Doom! (manga, vol. 1) by Satoru Yamaguchi, art by Nami Hidaka, translated by Elina Ishikawa-Curran 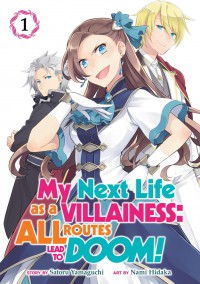 My Next Life as a Villainess: All Routes Lead to Doom! stars Katarina Claes, the rich and spoiled daughter of Duke Claes. Or at least we're told she was spoiled - at the start of the volume, Katarina is 8 years old and has just hit her head, prompting her to remember her past life as a 17-year-old otome game fan from our world. She was somehow reincarnated as the daughter of a duke in a world where magic exists.

As the story progresses, she gradually remembers other important details...like the fact that the world she's living in is actually the world of the otome game she was playing before she died, and that Katarina was a villainess in the game. Not only that, but the Katarina of the game had absolutely no good endings. If the player achieved a good ending with one of the game's guys, Katarina usually ended up exiled. If the player achieved a bad ending, Katarina was usually killed. Katarina would like very much not to die. She'd also prefer not to be exiled, but if that's going to happen, she figures she needs to learn skills that will help her earn a living.

This first volume deals primarily with the years prior to Katarina turning 15, her age when the otome game officially began. Every male child she meets turns out to be the child version of a romanceable character from the game, and every female child is a character who acts as one of the player's rivals for the romanceable characters' love. As Katarina meets them, she makes friends and does her best to avert the terrible endings she knows lurk in her future.

In the days since I finished reading this volume, I've found myself going back to it again and again to reread my favorite parts. And this is only the introduction. Almost all of it is devoted to child Katarina meeting the child versions of characters from the game and trying to nudge them onto a path that won't result in her death or exile. Usually this involves doing something she'd happily do anyway, like befriend the characters. A misunderstanding also results in her picking up a new hobby, gardening.

If I'm having this much fun with the series now, I can only imagine how much I'm going to enjoy the next volume. Katarina was delightful. Every time she met a new character from the game, versions of herself held mini meetings inside her head to discuss strategies for dealing with the potential bad endings the characters might bring her. I loved that so many of her strategies basically involved befriending people and having fun with them. I was not expecting this series to be so sweet.

Although Katarina didn't realize it since she was way too busy making friends and trying to ensure her own survival, her behavior basically set her on the path of being the heroine of a reverse harem romance story. Jeord, the "wicked prince" she accidentally ended up betrothed to, seemed to have genuinely fallen in love with Katarina by the time she reached the dreaded age of 15. Katarina, for her part, still figured he'd somehow do a complete 180 and ditch her when he met the game's heroine - I'm looking forward to the heroine's appearance, which I'm assuming will happen in the next volume.

The other characters (possibly the girls as well?) also seemed to have fallen for Katarina during her attempts to avoid her future bad endings. It'll be interesting to see whether Yamaguchi actually plans to have Katarina end up with one of them, or if she'll just be oblivious throughout the entire series. At this point, Jeord has a leg up on everyone, what with him being Katarina's fiance and refusing to let anyone talk him out of it. Like Katarina, I'm still rooting for Alan and Mary to somehow end up together (hey, it could still happen). The Keith storyline isn't my thing, but I'm looking forward to watching Alan and Nicol lurk on the sidelines.

I had considered and rejected getting a J-Novel Club membership in the past, but I think this series is going to force me to break down. The next manga volume isn't coming out until November, and there are only so many times I can reread my favorite bits in this volume. I really want to read the original light novels, and a J-Novel Club membership would let me do that, possibly even without breaking my "no DRM" rule for e-book purchases, if I understand their FAQs correctly.