The Wize Wize Beasts of the Wizarding Wizdoms (manga) story and art by Nagabe, translated by Adrienne Beck 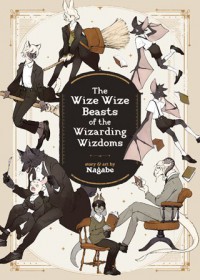 This is composed of eight short stories that take place in the same fantasy world. Main characters from some stories occasionally have cameo appearances in other stories. If I had to briefly describe this volume, I'd say it's slice-of-life m/m Hogwarts by way of Zootopia.

I really wanted to love this. Honestly, I expected to love this. It's by the creator of The Girl From the Other Side, a series I've enjoyed so far (I've read the first four volumes), the furries on the cover looked appealing, and I'd heard it was sweet.

Some of the stories were sweet. I count the story involving the bear and human (young wizard?) and the story about the deer and lizard in that category. The story about the unicorn and the griffon was nice too - not necessarily sweet, but certainly warm. Although I would have liked it to go on just a bit longer, long enough to confirm that the unicorn had definitely finally found someone he could trust.

The characters weren't just humans who looked like animals - they all retained some of their animal characteristics, which often played a part in the volume's stories. Usually it was little things: the unicorn could tell whether someone was a virgin or not, and the peacock fanned out his magnificent feathers whenever he went out courting. In some stories, however, the characters' animal characteristics played a bigger role. I enjoyed this in the story about the deer and the lizard - it took place in winter and featured a snuggling arrangement between the coldblooded lizard and his warmblooded roommate. However, things got a little too intense for me during the story about the bats (food regurgitation that morphs into the beginnings of sexual exploration) and the story about the wolf and the goat (the line between "I want you" and "I want to eat you for lunch" is distressingly thin).

There were three stories I didn't like. The very first story was one of those: a hare slipped his secret crush, a more academically gifted Siamese cat, a love potion designed to make him do whatever the hare wanted him to do, fall asleep, and then wake up with no memory of what happened. So, basically a magical date rape drug. The hare only used it to get a kiss (there is no sex in this volume, just occasional kisses), but it still grossed me out. The other story I really disliked was the one about the peacock and the crow. What the crow did was neither sweet nor okay. I found myself hoping that the peacock would eventually discover what he'd done and ditch him. The story about the dragon teacher and his much younger orphaned dragon student didn't quite cross my personal lines - the dragon teacher didn't act on his budding feelings and hadn't even yet realized how he felt - but I disliked Nagabe's presentation of the teacher's feelings as sweet and romantic.

I really liked Nagabe's character designs and artwork, and I liked a couple of the stories enough to want to reread them. I just wish I'd liked the overall volume more. Also, wow, this has a lot of unrequited love.

Each story includes two info boxes about the animals the main characters were based on. The volume ends with eight four-panel comics, one for each story in volume, as well as a comic-style afterword by Nagabe that's very much "I love furries, and so will you!"

That's my 3 stars of "ehh, I don't know" rating right there.