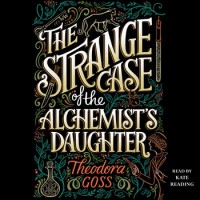 I'm finally done with this. I wouldn't say it's bad, but I have zero desire to read the next book.

This didn't so much have a main character as it had a bunch a prominent characters. Nearly every single one of them got to tell their own story (apparently if you're an older/middle-aged servant who doesn't have a horrible father, you don't have a story worth telling, because that's the only character who didn't get an opportunity to talk about herself in detail). The setup, with the book written like it was a novel the characters were writing, complete with constant interruptions from the other characters during the writing process, didn't contribute anything useful to the story that I could see and was just annoying.

Also, if I could cut one character from this book, it would be Diana. At first, I liked her spirit. If a bunch of abusive nuns told her to do something, she'd growl at them, try to bite them, and then do the opposite. However, this attitude continued throughout the entire book, and there were times I just wanted her to shut up and do as she was asked. Like, when someone tells you to take an injured person to safety, don't ask why you and not someone else. JUST DO IT. (I can't remember if this was the exact situation, but it was at least something similar. I wanted to scream in frustration, and I outright hated Diana for the rest of the book.)

I'll be using this for the Paint It Black square.