The Haunting of Tram Car 015 by P. Djèlí Clark 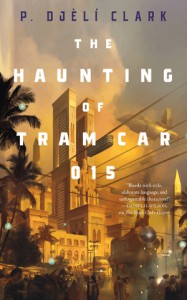 This novella takes place in Cairo in 1912. Agent Hamed Nasr and his new partner, Agent Onsi Youssef, work for the Ministry of Alchemy, Enchantments, and Supernatural Entities. Their newest case appears, initially, to involve a haunted tram car. However, they soon realize that there's something else going on. Unfortunately, knowing what they're dealing with isn't the same as actually solving the problem, considering the shoestring budget the Ministry has given them. The agents find themselves having to get a bit creative, with the assistance of some local women.

This was decent, and featured a few aspects that made me want to read more by this author. It's steampunk that, for once, isn't set in London. In fact, London didn't even come across as being particularly important - magic first entered this world via the work of a Sudanese man, who used a combination of alchemy and machinery to open a doorway to the world of the djinn. And although the book starred two male agents, women's suffrage was constantly in the background, and women played an important part in dealing with the being in the tram car. The few appearances of "boilerplate eunuchs" (robots) also fascinated me - some appeared to possess this world's version of artificial intelligence.

I'd happily read more stories starring Hamed, the experienced and somewhat grumpy agent, and Onsi, his shinier and more cheerful new partner, although I'd really love to read a full novel set in this world. From what I can tell, there's currently just one other story, "A Dead Djinn in Cairo," which stars Fatma el'Sha'arawi, the one female agent in the Ministry.