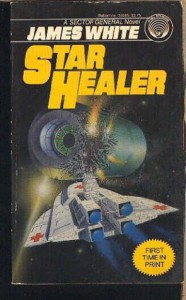 Senior Physician Conway is giving a bunch of trainees a tour of Sector General, a vast hospital in space, when he encounters his friend, the empathic and physically delicate Doctor Prilicla. Prilicla is acting oddly and encourages Conway to seek out Chief Psychologist O'Mara, who tells him the big news: Prilicla has been promoted to take over Conway's position as head of the ambulance ship Rhabwar, while Conway is being given the opportunity to try for Diagnostician. First, though, Conway is being sent away to the planet Goglesk to rest, think about his options, and observe the situation on Goglesk.

The Gogleskans are friendly but deeply afraid of physical contact, to the point where even doctors must avoid touching patients. Conway tries to figure out what's going on and what he might be able to do to help, but eventually has to go back to Sector General, where he is assigned many more cases, some of which look hopeless, than he's used to dealing with at once. He's sent to work in the Hudlar geriatric ward, and put in charge of a pregnant Protector (a mindlessly violent creature that must constantly be beaten in order to remain healthy, whose fetus is sentient and telepathic until the moment of its birth). He's also put in charge of several Hudlar patients injured in a horrific accident.

I had meant to read a new-to-me Sector General book but realized after a few pages that this was in the Alien Emergencies omnibus I read (and reviewed) several years ago. Still, I couldn't remember the details very well, so I decided to continue on.

As I said in my first review of this book, I liked that readers got to see Conway doing more than just working. Although, granted, even his rest periods tended to count as work - it's not uncommon for Sector General folks to talk shop during meals. At this point in the series, Conway and Murchison were married, so one of the things that frequently came up was the effect all those Educator tapes had on Conway's ability to interact with (and be attracted to, and have sex with) Murchison. I had forgotten how often sexual attraction was brought up in this book - I understood Conway's concern, and it made sense that his fellow Diagnosticians would want to give him advice and a sympathetic ear, but I still found the Diagnostician discussions about hot female Sector General employees to be irksome.

As much as I enjoy this series overall, its handling of female characters is terrible and very dated. Readers are told that Murchison is the second most knowledgeable pathologist at Sector General, and yet because she's a woman, she isn't allowed to take any Educator tapes, one of the most vital and helpful tools at Sector General. The argument (paraphrased) is that female minds would not be able to withstand sharing space with Educator tapes from donors that didn't share their same sexual interests. Never mind that Conway found himself attracted to a Hudlar female many times his own size and managed to adjust to that. And never mind that several of the aliens in the Sector General series don't have binary genders and therefore wouldn't be contributing Educator tapes based on male donors. Also, why not just have some of the Educator tape donors be female?

Anyway, back to the story. One of the other things I forgot about this book was that the Gogleskans would not be the primary focus. Just as I was getting involved in their story and wondering how White was going to resolve it, Conway was sent back to Sector General. He never returned to Goglesk, although there were indications that Khone, the Gogleskan doctor he encountered there, might eventually come to visit him at Sector General (and might be female? in which case, the reasoning for not allowing women to take Educator tapes becomes even weaker considering the effects of Conway and Khone's telepathic contact).

A bit of quick googling indicates that, if I continue reading the Sector General series, I should eventually encounter Khone again. I'm looking forward to it, but at the same time I'm hoping White doesn't mess it up. The way I saw it, the Gogleskan "problem" was a form of species-wide crippling anxiety, and I've found White's handling of psychological issues to be pretty terrible.

The Hudlar geriatric ward, Protector maternity case, and the aftermath of that accident were all fascinating to read about, although, again, I could see some of White's biases on display in the way he wrote about male vs. female Hudlar reactions after surgery. Also, I found it interesting that, in the Diagnostician discussion about the Hudlar geriatric ward, surgical intervention that might lead to a longer but miserable life was viewed as "doing something" and therefore better, whereas forgoing surgery and making the patient comfortable in its last days was viewed as "doing nothing."

Despite my complaints, I actually enjoyed this quite a bit. I love the premise of this series, and the various medical problems in this volume were interesting, despite my issues with some of White's biases.