Alice in the Country of Hearts: Love Labyrinth of Thorns (manga) story by QuinRose, art by Aoi Kurihara, translated by Angela Liu 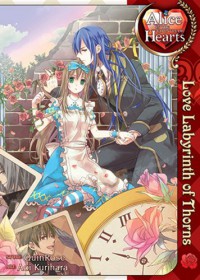 Upon ending up in Wonderland, Alice managed to convince Julius to allow her to stay with him at the Clock Tower. Julius gripes about Alice getting underfoot but doesn't put any effort into making her leave. Alice makes him coffee and gets irritated when he says he doesn't like it, but despite his complaints, he always drinks it, even if it's become stone cold. However, something suddenly changes between them. For some reason Julius begins avoiding Alice and acting cold and distant towards her. When she confronts him about it, he tells her to leave, so she does. Nightmare decides to step in and put both of their feelings to the test.

If Alice were a real person and I was asked to pair her up with someone in this series, I'd probably pair her up with Julius. He may not be the most exciting guy in the franchise, but he's generally emotionally stable and considerably less violent than most of the Wonderland guys. He's also the least likely to try to force her into anything.

In this one-shot, Julius knows that Alice has another world she calls home and worries the he'll get too attached to her and then she'll leave him. Alice, meanwhile, thinks that Julius considers her to be little more than an annoyance. Ace, who loves both of them, is on the sidelines trying to figure out how to get them to actually talk to each other about how they feel and what they're thinking. I have to say, I'm a big fan of Ace in caring and friendly mode. And hey, I'd be more on board with a threesome involving Alice, Julius, and Ace than Alice, Dee, and Dum.

Nightmare's solution to Alice and Julius's communication problem struck me as being a bit melodramatic and cheesy. There was a tower with a stairway blocked by thorny roses and everything. Julius had to act like some sort of fairy tale prince. I outright groaned when Nightmare explained what the thorns were and why they suddenly disappeared and were replaced by rose petals.

The overall pacing was good, and the story was nicely focused - no attempts to cram more franchise lore into the volume than there was time to handle. For example, Alice's unrequited feelings for her sister's fiance were only briefly referenced.

Aoi Kurihara's artwork was nice, but still nowhere near as appealing to me as Mamenosuke Fujimaru's, although Kurihara seemed to be better at drawing guns. Fujimaru's guns are laughably bad. As far as Alice x Julius volumes go, though, I think I prefer Alice in the Country of Hearts: The Clockmaker's Story over this. I recall the romance being more appealing, and it managed to work in more of Julius's backstory. Still, Love Labyrinth of Thorns wasn't bad.

Two full-color pages, a two-page (or two single page?) humorous bonus comic (Ace is adorable), an artist afterword in comic form, and an 11-page preview of Devils and Realist.