The Ghost Bride by Yangsze Choo 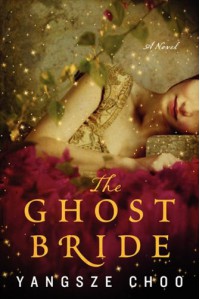 This is set in Malaya in 1893 and is narrated by Li Lan, the sheltered daughter of a now bankrupt but still fairly respectable family. She would normally be expected to marry, but her father, grief-stricken after smallpox killed his wife when Li Lan was very young, withdrew from the world and began taking opium. Her family doesn't know a lot of eligible and respectable young men that she might marry.

Even so, becoming a ghost bride is not something she'd willingly do, so she's horrified when her father brings home news that the wealthy Lim family would like her to marry their recently deceased heir, Lim Tian Ching. Li Lan refuses, but that doesn't stop Lim Tian Ching from entering her dreams and trying to change her mind. Meanwhile, Li Lan pines for handsome Tian Bai, the man she learns she was originally arranged to marry if Lim Tian Ching hadn't died and her family situation hadn't changed.

I've had this on my TBR for ages, but I don't know if I'd ever have gotten around to reading it if it weren't for the new Netflix adaptation. I saw the trailer, thought it looked amazing, and decided I wanted to read the book first. The author had mentioned on Twitter that the adaptation would be a bit different, and now that I've read the book and have rewatched the trailer, I can definitely see what she was talking about. In this case, I think the changes might have been for the better, and I'm very much looking forward to watching the show.

It's weird: technically, all the things I most liked about the book didn't show up until later, but I actually liked Li Lan more, and was more intrigued by the story, in the first half. Li Lan's position as an outsider to the Lim family, and a sheltered girl who'd never even been permitted to leave her home without someone accompanying her and taking care of her, gave whatever was going on with the Lim family an extra air of mystery. I wanted to know what had really happened to Lim Tian Ching, and what his family was hiding with their smiles and vast amounts of money and influence.

One of my favorite things about the book was its depiction of the afterlife, particularly the Plains of the Dead. The rules for how everything worked, and the way the world of the dead overlapped with the world of the living, were fascinating. The messed up family politics became even more interesting after Li Lan entered the Plains of the Dead and found out that there was a lot more going on than she realized.

That said, I feel like Li Lan was the wrong character for Choo to focus on. Maybe it would have helped if other characters had also been narrators, or if the book had occasionally switched to a third person narrator. Li Lan, unfortunately, was on the outskirts of pretty much every interesting storyline - the situation with the Lim family, the corruption investigation in the afterlife, the story of her mother. This worked well at first but became more and more annoying as the story progressed. If readers had to follow any one character, I'd have preferred it to be Er Lang. His investigation had to have been more interesting than Li Lan's mooning over Tian Bai, occasional anxiety that she wouldn't be able to get back into her body, and work as a servant in the afterlife.

Li Lan struck me as shallow. As sheltered as she was, I could understand her becoming starry eyed over Tian Bai, a handsome guy who was nice to her, but the extent to which she longed for him seemed excessive considering she barely knew the guy. She'd spoken to him maybe three or four times before deciding that she was in love with him. Romance-wise, things only got worse from there. A love triangle was introduced near the end of the book, involving a character who didn't even have a speaking role until almost halfway through.

fell for the guy she barely knew anything about (although at least she'd spoken to him more than she'd spoken to Tian Bai when she decided that she was in love with him). I mean, he told her that his family would be worse than the Lims, and she didn't know him and his family dynamics well enough to know whether he'd leave her at his family's mercy or fully support her and stand by her side during whatever objections his family had. Then there was what her decision would do to her own family. What would happen to Amah if Li Lan's father's opium addiction killed him? And would she really be able to keep tabs on her family as much as she thought she would? And surely someone like the guy she chose would have other better options than Li Lan? It wasn't like he knew Li Lan much better than she knew him.

Even though I wasn't wild about this by the time I reached its ending, I'm still very much looking forward to the show. I think the Plains of the Dead are going to look amazing on-screen, and some of the changes made to the storyline may smooth over or erase my biggest issues with the book.

A "Notes" section on ghost marriages, Chinese notions of the afterlife, Malaya, straits-born Chinese, Malay spelling, Chinese dialects, and Chinese names (as well as the meanings of a few names in the book).