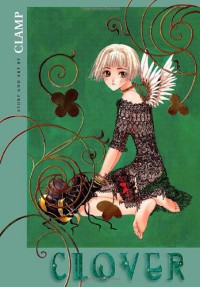 The structure of this series:

Clover 1 - Confusing action that doesn't feel like action because of how CLAMP drew it all. This thing is style over clarity, but it's so pretty I can almost forgive it.

Clover 4 - I only just started this, but it looks like it's an even deeper flashback, to the time before Clover 3's flashback.

Throughout everything: song lyrics in a fancy font that's a bit too hard for me to read. So I've stopped trying.

I've heard that this series was supposed to be a couple volumes longer but was ended prematurely, so I'm bracing myself for a frustrating ending.