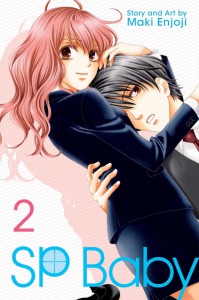 Tamaki has to miss work due to a fever and is overjoyed when Natsu, her secret crush, sticks around to take care of her. Unfortunately, Kagetora, Tamaki's handsy boss, also shows up. It isn't long before Tamaki is finally forced to deal with her unrequited feelings for Natsu and whatever seems to be developing between her and Kagetora...who is still engaged to another woman.

I had to struggle to work up the willpower to review this. In some ways it was better than the first volume, but honestly it just dissolved into an unfocused mess.

Although I gradually came to like and root for Tamaki by the end of volume 1, in this volume it seemed like Enjoji forgot what kind of person she was supposed to be. The young woman who tried to put professional distance between herself and her employer and make him take her seriously as his new bodyguard was gone. And, once again, Tamaki did things that prompted me to remember that I'd initially dismissed her as an idiot.

When Tamaki's dreams of ending up with Natsu went up in smoke, she dealt with it by spending an evening drinking until she puked and eventually passed out. She later woke up in bed with Kagetora - she was dressed in pajamas she couldn't remember putting on, and he was shirtless. She later learned that they hadn't done anything - apparently Tamaki had complained of being cold and Kagetora felt that the best way to warm her up was with his body heat. After all, they were stuck out in the frozen wilderness and had no other options.

Oh wait, no, they were in his mansion and he could have gotten her an electric blanket or something.

Kagetora came across as slightly less horrible in this volume than in the first one, but that was mainly because Tamaki was more receptive towards him. Since I already disliked them as a prospective couple after the events of the first volume, I had trouble working up any enthusiasm for the developments in their relationship in this volume.

Tamaki and Kagetora overcame the obstacles standing between them way too easily. It didn't even work well with the series' internal logic. Readers were told that Kagetora's uncle, the prime minister, had previously tried to adopt him but that Kagetora's father hadn't allowed it. Suddenly, for absolutely no reason, Kagetora's father was fine with that arrangement. All of the pieces in Kagetora's plan fell into place in a matter of days.

Oh, and the whole mystery of how Kagetora and Tamaki first met was a complete letdown. Was that one brief meeting supposed to be the moment he fell in love with her? Or was it some combination of that and his leg fetish? No wonder she couldn't remember when they'd first met. And what did any of that have to do with the whole "you're the only one whose touch I can feel and enjoy" thing? (I have a feeling Enjoji got some reader complaints about that, because she specifically addressed it in a note, saying that in real life analgesia is a serious condition and that, although she didn't have time to explain it more in the manga, Kagetora's condition was actually more psychological. Which left me with lots of questions.)

On the plus side, this series was short. It's too bad it didn't have anything to offer other than relatively decent artwork.

A 2-page "characters and story" section, character profiles (I would not have guessed that Tamaki was 23, her younger brother was 15, and Mike and Kagetora were both 25), and a short bonus comic showing how Master Daitokuji and his wife first met.