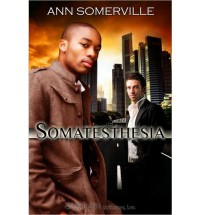 The first thing that attracted me to this book was the cover – the model in the foreground looks so fantastic I barely even noticed that there was someone in the background. Which was maybe a good thing, because that guy looks nothing like how I imagined Connor would look.

The description reminded me a little of works like Jordan Castillo Price's Among the Living (cop/detective/whatever with special powers partnered with cop/detective/whatever who's an ordinary human being). It also made me think that the child kidnapping case might take the entire length of the book to solve. It doesn't, not exactly. Unfortunately, I think my own description probably perpetuates that expectation, so now I'm going to give a few more details while still, hopefully, avoiding big spoilers.

The way this book was plotted felt...weird...to me. It starts with SCI training, which would have been more interesting, I think, if more details had been given. Then Connor and Devlin are sent off to investigate the child killing/kidnapping case. The passage of time was a little hard for me to follow, and there's one bit where I could have sworn they had decided to call it a day and suddenly they're off interviewing people (page 57 on my Nook). The sexual tension between them mounts but is handled badly by both of them: Connor refuses to admit his interest in Devlin, and Devlin, frustrated, purposefully hurts and upsets Connor. Before they have a chance to work things out, the case is solved, although the man responsible escapes. That happens at approximately the book's halfway point.

Devlin and Connor are ordered to take a 3-week-long vacation to recuperate. Devlin visits his family on their farm, which is like a self-contained little town, and Connor ends up joining them after he gets into a fight with his very controlling father. Connor and Devlin's problems are resolved almost right away, and suddenly everything is nice and easy between them, aside from the whole “what will we do about this relationship once we have to go back to work?” aspect. They continue their relationship in secret after their vacation ends, and Devlin helps Connor practice standing up to his father. Just when Connor is about to put all that practice to the test, the child kidnapping case comes back to haunt them both.

The change in moods felt so abrupt that it was a little like the story was stitched together. The stuff in the first half, with the child kidnapping case, was tenser. I enjoyed the signs that Connor and Devlin were interested in each other and wondered how their relationship would begin, what with them being on a case (because at that time I didn't realize that the case would be over when the book was only half finished). I did not like how things devolved between them. While Connor's lack of willingness to admit his feelings frustrated me, I understood it. I hated how Devlin acted towards Connor, and I wasn't a fan of Devlin's decision to go off and sleep with another guy rather than try to fix things between himself and Connor.

The next part, at the farm, might as well have been rainbows and kittens by comparison (and there really were kittens, by the way). I was looking forward to the sexual tension between Connor and Devlin as Devlin tried to make up for the way he acted and regain Connor trust...except then they had sex right away (or would “participated in sexual acts” be more accurate?). It was enough to give me mental whiplash. While I thought the details about the farm and how things worked there were incredibly interesting and provided lots of opportunities to show Devlin and Connor growing closer, I  would have preferred  it if these parts had been the author's way of working up to them having sex.

The rest of the book could easily have been about nothing more than Connor working on his relationships with all the people in his life. Thank goodness I remembered that the guy who kidnapped and killed the kids hadn't been caught yet, or his reappearance in the story would have come as a much bigger shock. As it was, I sort of expected something to happen. I was not so pleased about the aftermath – there didn't seem to be any logical reason for Connor to push Devlin away. They needed to establish better boundaries, since I think Devlin's use of the glasses crossed the line a few times (there were special glasses that allowed him to tap into Connor's enhanced senses, seeing what he saw, which he sometimes used for personal reasons, just to see where Connor was). My impression of Connor was that he needed to learn to open up to people more, so it made no sense for him to say that it would be better for him to get away from Devlin for a while. It felt cliched and inappropriate for the story and characters.

Now for the world-building, which, during the first half of the book, seemed a little weak and composed mostly of random little details. People had “readers” (similar to smartphones?), the price of a cup of coffee was outrageous, cyborgs like Connor existed, etc. It seemed like gay marriages and being gay were widely accepted things, except at one point Devlin had a thought about a friend of Connor's casually outing him (page 50 on my Nook), which seemed like an odd thing to think if being gay was considered no big deal. I thought the world-building became much richer and better integrated into the story during the part at the farm. Actually, so many aspects of the part at the farm seemed better that I almost wished the bulk of the book could have taken place there.

Overall, Somatesthesia was okay, but a little disappointing. I can't help but think that the romance would have worked better if Connor and Devlin's profession had been different and allowed for more quieter character-focused moments.